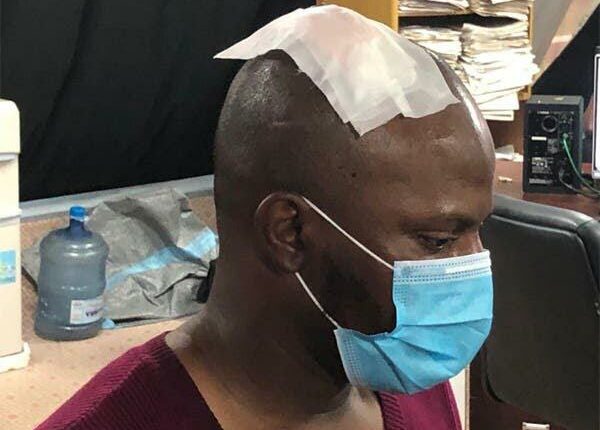 The Nigeria Union of Journalists (NUJ), FCT Correspondents’ Chapel has condemned the brutal attack on one of her members, Mr. Francis Ogbonna of the Arise TV during the #End SARS protest at the Force headquarters on Sunday.

It also commended President Muhammadu Buhari and the Inspector General of Police for listening to the cries of Nigerians and disbanding the Special Armed Robbery Squad (SARS).

Chairman of the NUJ, FCT Correspondents’ Chapel, Comrade Philip Nyam in a statement urged the Inspector General of Police, Mohammed Adamu to identify and appropriately sanction policemen responsible for the dastard act.

Ogbonna, a cameraman with Arise TV was attacked by some policemen who inflicted severe wounds on his head while covering the protest in Abuja.

The statement said “The NUJ, FCT Correspondents’ Chapel condemns in strong terms the brutality meted out to one of its members, Mr. Francis Ogbonna of Arise TV by some police personnel who attacked protesters at the Force headquarters on Sunday.

“It is most disturbing that some policemen are still committing the same heinous acts Nigerians are protesting against. This is a clear show of insensitivity to the feelings of millions of Nigerians and recklessness on the part of police personnel”

The chairman noted that Francis Ogbonna was not armed neither was he engaged in any violent act but was simply carrying out his legitimate duty with his camera and wondered why he became a subject of attack by the policemen.

“Why would a sane police man violently attack a journalists that is not armed or is not involved in any violent conduct? It was a peaceful protest and as a cameraman, Francis Ogbonna was busy videoing the event, so how does this affect or provoked the police personnel who decided to take laws into their hands by visiting mayhem on him?

“This is unacceptable and the NUJ, FCT Correspondents’ Chapel condemns this act of brutality and insanity. We are calling on the IGP, Mohammed Adamu to ensure that the perpetrators of this evil act are identified, arrested and made to face necessary disciplinary actions.

“We also urge the IGP to ensure that the police authorities take full responsibility for the medical bills of Francis Ogbonna. Anything short of this will not be acceptable to the Chapel.

“Let it be known to all uncivilized police personnel that the era of impunity and inhuman treatment of Nigerians is over and all must learn to adapt to a more civil means of engagement with members of the public”, the statement said.

All rights reserved. This post: '#EndSARS: NUJ Condemns Attack on Arise TV Staff, Wants erring policemen punished' and other digital content on this website, may not be reproduced, published, broadcast, rewritten or redistributed in whole or in part without prior express written permission from Anambra City News.