The suspects were apprehended by the authorities for supplying armed bandits with fuel to carry out nefarious activities in Katsina state. 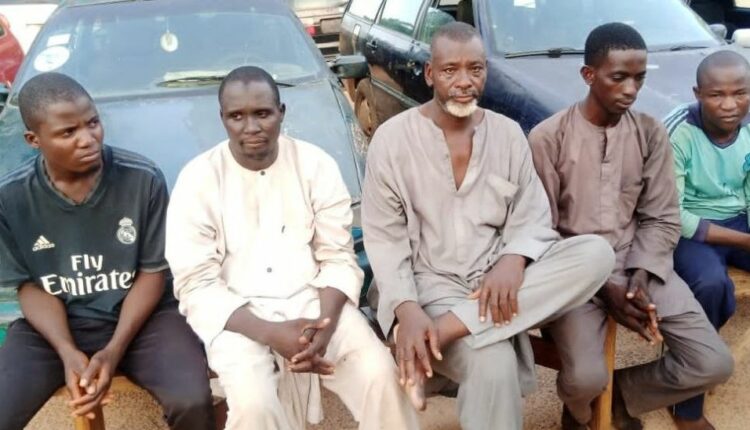 Operatives of the Katsina police command have arrested a 32-year-old Niger Republic national,  Lawal Shu’aibu alongside four others for allegedly selling petroleum products to bandits in a forest.

The suspects were arrested on Saturday September 18, while conveying the substance in a Volkswagen Passat car with Reg. No. XML 347 AA.

The police spokesperson in Katsina, Gambo Isah also explained the charges against the four other suspects. Sani Lawal, 28, of Magamar Jibia was arrested for conveying fuel in a Volkswagen Passat car with registration No. KMC 198 XB; while Abdulrashid Garba, 50, of Daddara village, Jibia LGA, was arrested for conveying fuel in his Volkswagen Golf III wagon with registration No. AR 719 KTN. 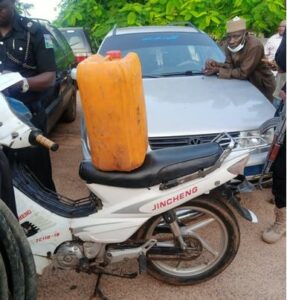 Commenting on the arrest of another suspect identified as 57-year-old Tigal Haruna of Kofar Guga Quarters, Katsina, Isah said;

“He was conveying fuel in his Passat motor vehicle with registration number FC 977 LKJ. Nemesis caught up with the suspects when they were arrested long Katsina – Jibia road while on their way into the forest.

“In the course of investigation suspects confessed to be selling the fuel at fringes of the forest, contrary to Executive order and other extant laws of the Federation. Investigation is ongoing.”

Another suspect arrested on Saturday was Shafi’u Haruna, 25, of Anguwan Nakaba village in Sabuwa LGA of Katsina State.  The police said the suspect was observed to be frequently buying fuel at a filling station in Dandume in his motorcycle.

“Consequently, police detectives on surveillance patrol at the said filling station secretly followed after him which led them into an uncompleted building where he was arrested while transferring the fuel into a jerry can.

“In the course of investigation, (the) suspect confessed to the commission of the offence and further stated that he came all the way from Sabuwa LGA to buy the fuel and take it to the forest. Investigation is ongoing.”