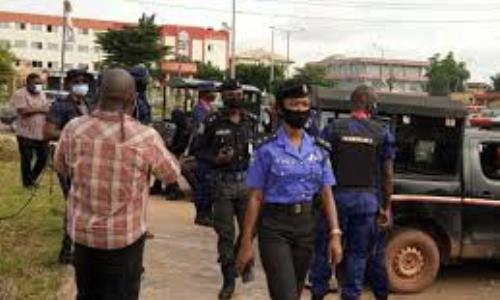 The Coalition of United Political Parties (CUPP) has condemned what it described as the alleged forceful take-over of the Edo State House of Assembly by the police and therefore called on President Muhammadu Buhari to call those behind the plot to order.

CUPP in a statement by its spokesperson, Ikenga Imo Ugochinyere titled ‘Take-over of Edo State House of Assembly with Federal Police’ and made available to Daily Tracker lamented that the legislature remained a unique feature of democratic governance.

The opposition coalition said any attempt to use former members of Edo House of Assembly whose seats have been declared vacant to take over the House is an invitation to anarchy and an act of treason.

“We therefore call on President Muhammadu Buhari and his men to halt all actions and inactions capable of pushing the nation towards a crisis like the 1983 crisis that led to collapse of democracy.

“We also urge the President to call the former factional chairman of the All Progressives Congress, Adams Oshiomhole and his desperate followers, to order before his actions in Edo State instigate electoral violence that will consume the nation and its hard-won democracy.” The statement noted.

The CUPP also called on Governor Godwin Obaseki to mobilise the citizens of the state to resist any attempt at forceful take-over of the Assembly.

“In doing so, the governor is urged to invoke the provisions of Section 20 of the Criminal Code and mobilise the citizens to exercise their constitutional right to stop people flouting the laws or carrying out criminal activities in their presence

“We however praised the governor for showing maturity so far in the face of unwarranted provocation. We advise him that while he is displaying maturity, the red line must be drawn.

“No one person, no matter how highly placed, should be above the law. The governor must be ready to protect the people of the state and his mandate from predators,” CUPP noted.

Covid-19: CAJ seeks end to attacks against Journalists on frontline