These unidentified gunmen, on Thursday at about 3:15 pm attacked the convoy of Honorable Chris Azubogu, the member representing Nnewi North/Nnewi South and Ekwusigo Federal Constituency, killing one of his drivers. 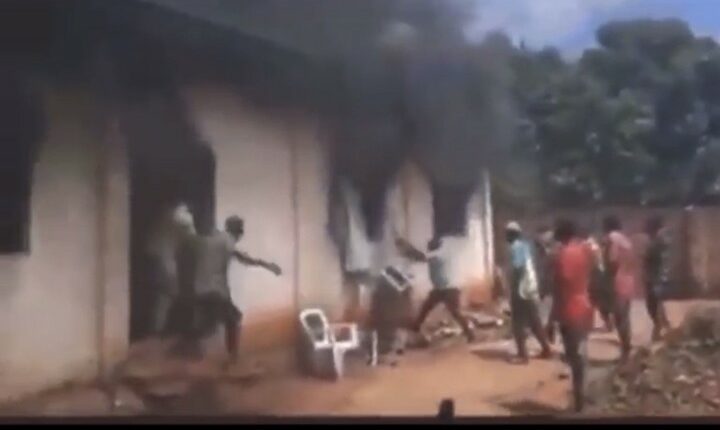 These unidentified gunmen, on Thursday at about 3:15 pm attacked the convoy of Honorable Chris Azubogu, the member representing Nnewi North/Nnewi South and Ekwusigo Federal Constituency, killing one of his drivers.

Vanguard gathered from an eye witness that the gunmen were driving in two Sienna vehicles and one Lexus jeep.

Hon. Azubogu was attacked on Nnewi–Nnobi Road on his way back to Nnewi from Awka after his formal declaration for the All Progressives Congress, APC, according to Vanguard source.

Vanguard gathered that the gunmen who were dressed in red T-Shirts and black Jean trousers, storm the Police station in a Lexus car, and shot their way into the Police station after killing a policeman that accosted them on entry and a civilian.

They were said to have released all the people detained in the Police Station and ordered them to leave the premises of the station without further delay or have their lives snuffed off.

An eye witness told Vanguard that the road leading to Oko, a nearby town to Ajali, has cordoned off by security men who were engaged in a gun duel by the rampaging gunmen.

The incident according to the eyewitness threw the entire Ajali, Akpu and other neighbouring towns to Ajali into fear and confusion.

On the attack of Hon. Azubogu, the driver of one of the vehicles with registration number, Abuja ABC 307 CM was said to have been shot dead instantly, while the black car in which Hon Azubogu, was supposedly driven had several gunshots.

The gunmen were also said to have collected guns from security men at Roban Stores situated along Nnewi –Nnobi road after attacking the lawmaker’s convoy and zoomed off.

As at the time of filing this report, the blue Toyota car with Abuja number and the black jeep with bullet holes were still at the scene of the incident while the dead driver’s body had not been removed.

Newspapers, documents bearing ‘Mr Project’, Azubogu’s pet name, were among other documents which littered the road.

The Police Public Relations Officer, PPRO, Mr Ikenga Tochukwu, a DSP, was not disposed to pick his call when contacted on the phone to comment on the two incidents.