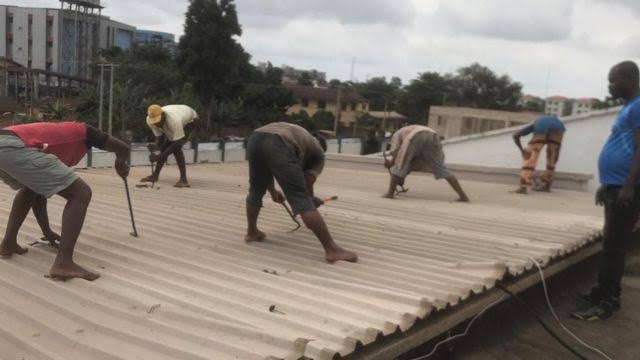 The drama playing out at the Edo State House of Assembly took a new turn, Thursday afternoon as some men reportedly vandalised the Assembly complex and removed its roof.

Channels Television had shared the video while some men were busy removing the iconic legislative mace on top of the building housing the legislative complex.

Also, some trucks were seen offloading gravels at the gate of the Assembly Complex while the men trooped into the building.

Heavily armed policemen had on Thursday morning surrounded the Assembly complex, in what some political watchers described as an invasion.

The drama may not be unconnected with Wednesday’s impeachment of the Assembly’s Deputy Speaker, Yekini Idiaye by the state lawmakers. Idiaye had on Tuesday declared support for the governorship candidate of the All Progressives Congress (APC), Pastor Osagie Ize-Iyamu. 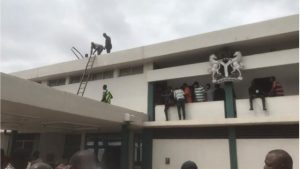 The member representing Orhionmwon-South constituency, Roland Asoro, has since been appointed deputy speaker and was immediately administered the oath of office and oath of allegiance by the Speaker.

All rights reserved. This post: 'Breaking: Edo House of Assembly roof removed' and other digital content on this website, may not be reproduced, published, broadcast, rewritten or redistributed in whole or in part without prior express written permission from Anambra City News.