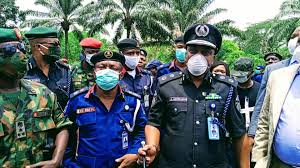 The guidelines were contained in a statement released on Thursday by the Edo State Police Command.

According to the ‘Election Guidelines’, “No one is allowed to wear any cloth or emblem or colour signifying any political party to the polling units.”

The guidelines also banned VIPs, political appointees or anybody from moving around with security details around the polling units.

The guidelines further said, “Everyone is enjoined to vote and return their respective houses or remain peacefully within approved perimeters of the polling centres.

“No one allowed to move around from one polling unit to another as there shall be restriction of movements on the day of the elections.

“Only INEC accredited monitors / observers are allowed to move around for the purpose of election monitoring, and they must all wear their INEC accreditation tags.

“Only accredited journalists are allowed to cover the election. All such journalists must carry their accreditation tags.

“Praise singing, drumming and dancing around the vicinity of polling unit are not allowed,” the guideline stipulated.

The police also banned vehicles branded in any political party colour and emblems from being deployed on any election assignment.

“Selling of alcohol beverages around the polling booth and collation centres is totally bannned,” the police Election Guidelines added.

“For any Emergency or useful Information reach out to the Edo Election Security Joint Operation Control Room via these dedicated phone Numbers 08154352118, 08154350436 (calls only).”‎