Peoples Democratic Party (PDP), is in sync with the INEC’s position and has urged the electoral body to use the electronic direct transmission of results in the 2023 general elections and other future polls. 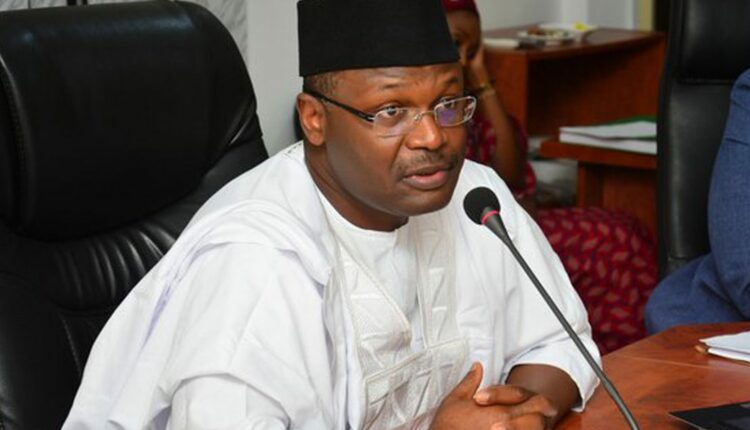 The insistence of the chairman of the Independent National Electoral Commission (INEC), Professor Mahmood Yakubu, to proceed with the adoption of an electronic voting system ahead of rounds of elections, despite the unaddressed legal, logistics and constitutional constraints, has raised curious concerns of many Nigerians, this newspaper can report.

Also, the main opposition, Peoples Democratic Party (PDP), is in sync with the INEC’s position and has urged the electoral body to use the electronic direct transmission of results in the 2023 general elections and other future polls regardless of the visible constraints and landmines identified.

There is a growing concern among key stakeholders over what is turning to be a a ‘strange alliance’ between Mahmood and the PDP on electronic voting/transmission. Sources reveal that the chair who reportedly being suspected of being sympathetic to the party is pushing for its stand on the matter. This development has pitted majority of the stakeholders against one another.

Senate, House of Reps, others debate

Electronic voting, which involves the deployment of technology in the conduct of elections, generated renewed clamour after the 2019 general elections and this made the current 9th National Assembly to expedite action on the amendment of the Electoral Act.

With almost all the stakeholders evenly disposed to adopting such a voting method if the extant laws are put in place, the proposed electronic reform which is expected to reduce glaring manipulation, irregularities, falsification of results, hijack of ballot boxes, intimidation, thuggery, and other fraudulent tendencies in the voting process, however, suffered an impediment when the transmission of election results electronically and spending limits for candidates of political parties became contentious.

In the Senate, during the clause-by-clause consideration of the bill, deputy senate whip, Sabi Abdullahi, prayed the Senate to amend the section to read, “The commission may consider the electronic transmission of election results provided the network coverage in the area concerned is adjudged to be conducive for the transmission of results by the National Communication Commission.”

Speaking in a similar tone, the Majority Whip, Orji Kalu, stated, “I am voting ‘no’ because there is no telecommunications network in my village and I will not want my people to be disenfranchised.”

Also before heading for its annual vacation in July, it took the House of Representatives two days to consider the report on the Electoral Act Amendment Bill, or better still, to consider the controversial section 52(3) of the bill.

After the impasse, the House passed the majority of the 158 clauses of the bill intact including Clause 52 (2), which provides that the INEC shall determine the mode of voting/transmission of election results.

Meanwhile, upon resumption from their annual recess, both the Senate and the House of Representatives have set up a 14-member Conference Committee on the Electoral Act Amendment Bill to achieve concurrence, harmonise and resolve gray areas of the bill.

The bill will be transmitted to President Muhammadu Buhari for assent after the harmonisation of the two versions by the conference committee of both chambers.

Reinforcing the reservations of the lawmakers urging for a second look, an Executive Commissioner at the NCC, Barr. Adeleke Adewolu, who briefed lawmakers at the House of Representatives during the debate, said that only 50 percent of the country has the 3G coverage required for transmission.

Justifying the stance of his colleagues especially APC senators, Senate President, Ahmad Lawan, said the senate voted the way it did during the consideration of the Electoral Act 2010 Amendment Bill, in defence of about half of the Nigerian voters whose votes may not be counted with immediate deployment or application of electronic transmission of election results.

He said, “When you have not reached that stage where you could deploy the electronic transmission from every part of the country, then you have to be very careful. And no matter what anybody may say, you cannot have about 50 percent of Nigerian voters not participating or not getting their votes counted in elections and say it doesn’t matter, that we have to start the electronic transmission.

“Our party calls the attention of the commission to the fact that it no longer has any excuse not to employ the direct transmission of results from polling units, which will ensure credible elections by eliminating manipulations, alterations, switching, and disappearance of election results during manual collation processes.

“The PDP will take all necessary legal steps to ensure that this APC scam is not allowed to stand in any way. We, therefore, call on all lovers of democracy who see the free, fair and transparent election as vital, to stand up against this fraud.”

But the Commission at the centre of it all, the INEC, suggested it has the capacity to transmit election results electronically from remote areas across the country, adding that its technology capacity had uploaded results from very remote areas in previous elections.

With the NASS harmonization committee on the amendment still working on an acceptable middle ground, many Nigerians have been surprised with the several eruptions of INEC chairman, Prof Yakubu, on the controversial reform.

At a workshop for journalists covering the commission with the theme: “Inclusive Elections in Anambra State and Beyond”, Yakubu, who was represented by INEC’s National Commissioner in charge of publicity and Chairman, Voter Education, Festus Okoye, said the November 6 governorship election result would be transmitted electronically real time.

“The Commission will also use its new technological device to upload polling unit level results to its central result viewing portal. Nigerians that have access to internet facilities can log in and view the results as they are being uploaded.”

However, a former minority whip in the House of Representatives, disclosed that the INEC chairman is acting out of the stipulated rules that sets up the Commission.

“I really don’t understand the reason for the haste on the part of the INEC chair to quickly enforce what has not been made a law. Is there something we are not being told because this appears to be love for a particular party, rather than love the country.

“I also found it befuddling that INEC is claiming that it has the capacity for electronic voting even in remote areas when the NCC, which is responsible for the provision of qualitative and efficient telecommunications services throughout the country, already highlighted the limitations. Is INEC a network provider or PHCN who gives power supply?”

Also speaking, a social commentator, Comrade Tunji Adele, said it is curious that an election umpire and the main opposition party are on the same unwavering page over an amendment that has to do with over 200 million Nigerians.

While calling for merit in the discussion of the electoral law, he said Yakubu, who was selected by former President Goodluck Jonathan to serve as Asst. Secretary, Finance and Administration during the 2014 National Confab, has to be above board to prove his non-partisanship to any party, individuals and groups.

“I was first opposed to the action of the senate but when I recalled the incidents around the infamous Dubai Server in 2019, I had a rethink because some of those shouting to high heavens may have one or two manipulations tendencies.

“People think Lagos or Abuja are the only places that made up Nigeria. But they are limited in scope because most other places do not have the facilities for electronic voting, and this would lead to the disenfranchisement of eligible voters.”

“Electronic voting is futuristic, but not realistic for the north at a time like this. particularly. Is it possible to have electronic voting or transmission of results without electricity? The answer is no.”

“The PDP conducted general elections four times, why didn’t they introduce electronic voting since them? Why are they ganging up now on what they failed to do.”

While raising the alarm that the INEC chairman may probably be under pressure especially from the opposition, he said the subject of conversation should be on how to see to the harmonization and subsequent signing of the law.

“I think the disposition of the INEC chairman to anything PDP should change because it appears they (PDP)want real chaotic system that will just ignite like fire.”

With alleged insinuation that the Professor is still keen on seeing the report of the national conference being adopted after nearly 7 years. It is left to be seen what may become of the seemingly soft spot the INEC chair has for the opposition that actually brought about a similar way of reasoning, especially on the electoral voting system.