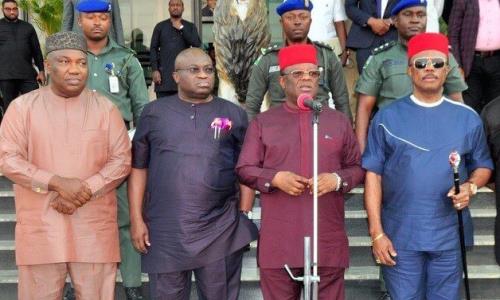 Governors of the five South-East State rose from a virtual meeting on Sunday with an appeal to the former Secretary to the Government of the Federation, Anyim Pius Anyim and billionaire businessman, Prince Arthur Eze to cease hostilities.

Anyim and Eze have recently engaged in war of words over some unresolved issues known to them but may not be unconnected with the administration of former President Goodluck Jonathan.

Anyim, a former Senate President held sway as the nation’s SGF during the administration of President Jonathan.

The chairman of the South East Governors’ Forum and Governor of Ebonyi State, Chief Dave Umahi told newsmen at the end of their virtual meeting that the forum had appealed to both Anyim and Eze to sheath their swords and allow the governors to wade into their misunderstanding.

He said the forum also discussed other crucial issues affecting the people of the area, noting that the governors once more expressed their profound gratitude to President Muhammadu Buhari for funding the second Niger Bridge and the Enugu International Airport renovation projects.

He reiterated that the August 30 reopening of the airport remained sacrosanct, adding that they were optimistic that the second Niger bridge project would be completed by 2022 as planned.

Umahi said the forum also resolved to unveil the name of the joint security outfit of the region during their next meeting, adding “after that, we will give go-ahead to our Attorneys-General to go ahead with the draft bills which will then be sent to the five state Houses of Assembly for deliberation and passage into law.”

The Forum chairman also disclosed that the governors would liaise with the Federal Government to make funds available for the Eastern railway corridor, since according to them, there is currently no funding for the corridor, which cuts across South-South, South-East, North Central and North-East regions of the country.