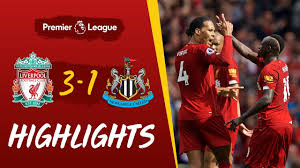 Even with literally little on the line, Champions, Liverpool continued their points haul as they finished on their highest Premier League points total coming from behind to beat Newcastle on the final day of the season.

Jurgen Klopp’s Reds accumulated 99 points, one better than their 1978-79 total – adjusted to three points for a win – and 18 above runners-up Manchester City.

Dwight Gayle put Newcastle ahead after 25 seconds from Jonjo Shelvey’s free-kick, the fastest goal ever scored on a Premier League final day.

But Liverpool, who left their vaunted front three of Mohamed Salah, Sadio Mane and Roberto Firmino on the bench, levelled through Virgil van Dijk’s header.

Divock Origi put Liverpool ahead from 20 yards from Andrew Robertson’s pass before Senegal forward Mane curled home a late third for the visitors.

Newcastle – who have been safe from relegation for weeks – have been in limbo for a long time because of the delayed Saudi Arabian takeover.

They had a dream start when Gayle latched onto Shelvey’s opportunistic quick free-kick and slotted past Alisson, who got a touch to the ball but could not keep it out.

But that would be the only time they touched the ball in the Reds’ area in the first half.

Liverpool boss Klopp experimented with his selection in their final game of a successful season – with the front three of Salah, Firmino and Mane as well as right-back Trent Alexander-Arnold left on the bench.

They were far from their best with Takumi Minamino’s saved effort after 28 minutes their first real chance.

But from that point until the final whistle, the new Premier League champions dominated.

Van Dijk equalised when he headed a looping effort into the top corner from Alex Oxlade-Chamberlain’s cross – his fifth Premier League goal of the season.

Origi then powered home in the second half to end a 23-game goal drought that stretched back to December.

Salah, Mane and Firmino all came on with 26 minutes to go and Liverpool predictably looked more fluid and dangerous from that point.

Egypt forward Salah drove a shot off the post from a tight angle while Mane cut in from the left from Firmino’s ball before adding a late third.

Now both teams can think of their short summer breaks – the new season starts in seven weeks – although in Newcastle’s case it is hard to start planning anything until a takeover decision is made.