All the drama after the break was in stark contrast to a first half that saw City dominant. 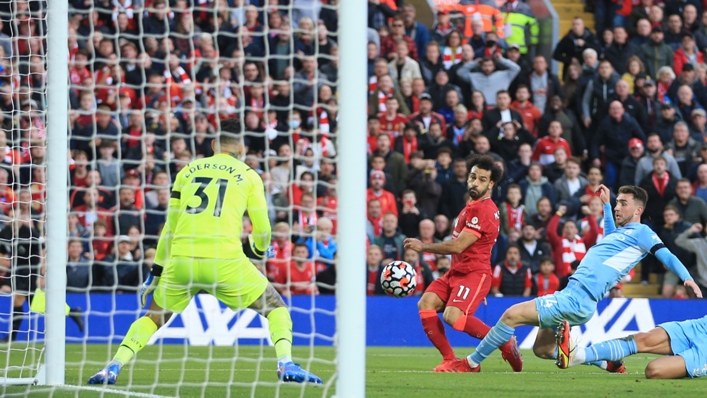 Manchester City twice rallied to secure a 2-2 draw against Liverpool after a pulsating encounter between the previous two Premier League champions at Anfield.

Kevin De Bruyne’s left-footed shot pegged back the Reds for a second time after a sensational solo Mohamed Salah effort had put Liverpool ahead again, the Egyptian holding off Joao Cancelo before moving beyond Bernardo Silva and Aymeric Laporte to rifle in a right-footed drive from a tight angle.

Uncharacteristically passive in the first 45 minutes despite playing towards the Kop, Liverpool went ahead when Sadio Mane slotted home Salah’s throughball, only for Phil Foden to respond for City.

Fabinho appeared set to put the Reds ahead once again only for a brilliant Rodri block to prevent him from slotting into an unguarded net, meaning a point apiece for both teams.

All the drama after the break was in stark contrast to a first half that saw City dominant. Foden was twice denied by Alisson and also felt he should have been awarded a penalty when clipped by James Milner, who was then fortunate to avoid a second yellow card for a foul after the break.

The closest Liverpool went to scoring in the first 45 minutes came when a Ruben Dias back pass nearly caught out Ederson, but Jurgen Klopp’s half-time words worked a treat as the hosts came alive after the interval.

Foden’s response was emphatic, his left-footed strike flashing beyond Alisson, yet Salah appeared to have landed a knockout blow in the heavyweight battle with a glorious run and finish.

City, however, climbed off the canvas to make sure they avoided a knockout defeat, the scorecard finishing level thanks to De Bruyne, whose first-time attempt from the centre of the penalty area clipped Joel Matip on the way in.

What does it mean? City slickers shine but Reds show their mettle

There was little sign of what was to come as City played with a swagger in the first half as Liverpool had just one shot, their fewest in the opening 45 minutes of a Premier League match at Anfield since January 2017.

Pep Guardiola was left apoplectic when Milner did not see red yet had calmed down enough by the full-time whistle to share a hug with opposite number Klopp. The result does see Liverpool extend their unbeaten run to 17 games, but City showed why they may just be the team to beat in the title race.

Foden and Salah show their class

Salah has now scored in each of his last seven appearances for Liverpool in all competitions, equalling his longest streak for the Reds. On the day the club paid tribute to the legendary Roger Hunt, who died at the age of 83 this week, their current superstar forward gave a reminder of just why he is worthy of a bumper new contract.

Jack of all trades – including centre forward?

Jack Grealish was something of a passenger during his 66 minutes on the pitch. He did have one off-target shot but just 27 total touches, the lowest number for any City player to start the match. While his struggles were by no means all of his own making, it highlighted again how Guardiola’s squad could have done with the addition of a new striker during the previous transfer window.

– Liverpool have only managed to beat Manchester City on one of the last seven occasions in the Premier League (D3 L3), conceding 14 times across those seven fixtures.
– The Reds remain the sole Premier League side yet to lose in the top flight this season (W4 D3), extending their unbeaten run in all competitions to 19 matches (W13 D6) since their 3-1 defeat to Real Madrid back in April.
– Manchester City conceded more goals this evening (2) than in their previous seven Premier League games combined beforehand (1), while they faced four shots on target against Liverpool, only two fewer than they had in their six other Premier League matches combined this season (6).
– Foden (21y 128d) is the youngest player to score in three consecutive Premier League appearances against Liverpool since Romelu Lukaku in November 2013 (20y 194d).
– Salah has either scored (9) or assisted (3) in eight of his nine games in all competitions for Liverpool this season, having a direct hand in more goals so far in 2021-22 than any other Premier League player (12).
– Salah has now scored in seven matches in a row in all competitions, equalling his best ever scoring run with Liverpool, doing so for the first time since April 2018.

Both clubs can take stock during the international break before resuming their league campaigns on October 16. While Liverpool are involved in the early kick-off away at Watford, City host Burnley.