Harry Kane was unable to end his dry spell despite going close from the halfway line, meaning he has gone six league games without a goal for the first time in six years. 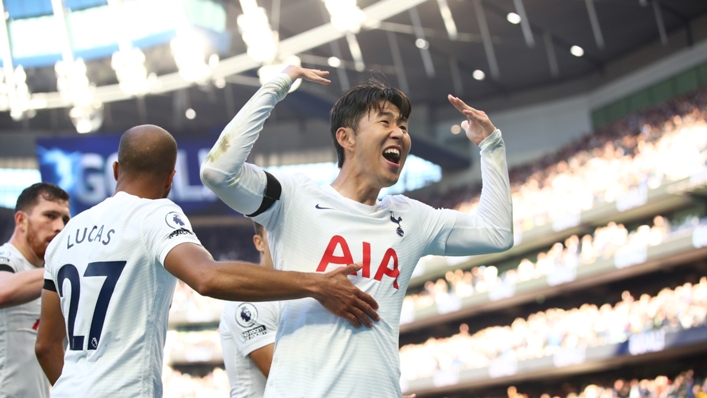 Spurs had lost their previous three league games by an aggregate scoreline of 9-1 and another defeat would have seen them reach a 17-year low, but Nuno Espirito Santo’s men got the job done despite the temporary disappointment of being pegged back by Villa.

Harry Kane was unable to end his dry spell despite going close from the halfway line, meaning he has gone six league games without a goal for the first time in six years.

But Son set up Hojbjerg for the first-half opener before providing the ball that Matt Targett turned into his own net under pressure from Lucas Moura for the winner, with Ollie Watkins having equalised for the visitors.

After a lively start without threatening the Villa goal, Spurs first troubled Emiliano Martinez in the 22nd minute as Kane spotted him off his line from about 50 yards, the goalkeeper forced into a desperate save.

Martinez was helpless soon after, though.

Villa squandered possession in midfield and Spurs broke with Son, who passed across the edge of the box to Hojbjerg, the Dane placing his effort into the bottom-right corner.

Chances arrived at both ends early in the second half, but Cristian Romero made an important block to thwart Targett and Son volleyed just over following fine work by Emerson Royal.

Watkins made Spurs pay for not making the most of their superiority, the striker tapping in from Targett’s pass.

But Spurs got the winner four minutes later, Son cleverly beating his man before firing across goal for Lucas, whose presence forced Targett to put into his own goal.

What does it mean? Spurs ease pressure on Nuno

He will be back in a tricky spot again soon if Spurs fall into another rut, but for now Nuno can rest easy heading into the international break.

Suffer defeat to Villa and many would have been expecting him to not be in charge for their next Premier League game, but they showed character to win and arguably demonstrated more attacking purpose than in any other top-flight game under Nuno.

They had the fewest shots in the league (56) prior to this weekend, but Spurs managed 17 against Villa, the most they have produced in a single game in 2021-22.

There were several Spurs players who impressed, with Kane, Lucas and Emerson among them, but Son was the star. While he will not get the assist for Targett’s own goal, it is still fair to say the South Korea forward set up both goals. He is now on 11 involvements in his last 12 home league games and was central to so much of the hosts’ best football.

There have been times this season when Kane has not even looked a threat, which has made his scoring woes worse. But that really was not the case here, with four of his six shots hitting the target. Granted, the Kane of last season almost certainly would have got one in this game, but Spurs won regardless and his overall performance was undoubtedly a positive.

– Tottenham have won 11 of their last 13 Premier League games against Aston Villa (L2), scoring two or more goals in each of those 11 victories.

– Aston Villa suffered their 72nd away Premier League defeat in London; only Newcastle United (81), Everton (79) and Southampton (74) have lost more such games in the competition.

– Harry Kane has not scored in any of his last six Premier League appearances, his longest scoreless streak in the competition since failing to net in his first six games of the 2015-16 campaign.

– Son Heung-min has been involved in 11 goals in his last 12 Premier League games at the Tottenham Hotspur Stadium (six goals, five assists).

Tottenham go to Newcastle United after the international break, while Villa will play host to local rivals Wolves.