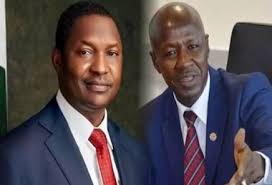 The suspended Acting Chairman of the Economic and Financial Crimes Commission, (EFCC), Ibrahim Magu, has asked the Justice Ayo Salami (rtd)-led investigative panel to summon the Attorney-General of the Federation and Minister of Justice, Mr. Abubakar Malami.

Magu said the appearance of the minister had become necessary since he was the one whose letter to the President Muhammadu Buhari triggered the setting up of the panel. He said in the spirit of fair hearing, Malami should be summoned to testify and tender relevant documents in the probe.

The embattled EFCC boss is being investigated by the panel for alleged abuse of office and other infractions.

However in letter signed on his behalf by his lawyer, Mr Wahab Shittu and addressed to Justice Salami, Magu sought the recall of “several witnesses who appeared and testified before this judicial commission of inquiry at the time” he “was not allowed to participate in the proceedings and cross-examine such witnesses”.

Shittu argued in the letters that the requests were made in line with the spirit of fair hearing guaranteed under section 36 of the Nigerian Constitution.

He added in the letter requesting the AGF to be summoned, that his client was entitled to being confronted with the allegations leveled against him, especially those by Malami, whom he described as his “main accuser”.

The letter read in part, “We believe that consistent with the fundamental principles of fair hearing as guaranteed under Section 36 of the constitution of the Federal Republic of Nigeria 1999.

Shittu, who cited section 36(a), (b), (c) and (d) of the Nigerian Constitution, added, “Based on the foregoing, we humbly request that the Honourable Attorney General who is the main accuser in these proceedings be graciously invited to give evidence in connection with the subject matter of this inquiry with specific reference to our client in the interest of FAIR HEARING.

“We believe this request ought to be resolved before our client is called upon to enter his defence in these proceedings.”

A copy of the proposed subpoena attached to the letter sent to the Justice Salami panel stated that Malami was “expected to give evidence on his allegations against Ibrahim Magu”.

Specifically, Shittu stated that his client expected Malami to appear in the panel to testify on his allegations including, that the “Acting Chairman of EFCC is not acting in the overall best interest of the country and the policies of this administration due to its mismanagement and lack of transparency in managing recovered assets”.

He also asked that Malami testifies on his allegation of “diversion of recovered assets for personal enrichment; neglecting to investigate the P&ID case as directed by the President; and flagrant disobedience to directives and to court orders”.

He also sought Malami’s testimony on “Final Report Of The Presidential Committee on Audit Of Recovered Assets (PCARA): Mismanagement and Lack of Transparency in Managing Recovered Assets”.

He noted that the application for issuance of summons against Malami “ought to be resolved before our client is called upon to enter his defence in these proceedings”.

He asked the panel to give “guidance on specific procedure, schedule and timeline earmarked for the defence to enable our client adequately prepare and call relevant and material witnesses/documentary evidence ahead of his defence in the proceedings”.

All rights reserved. This post: 'EFCC Probe: Magu asks Salami panel to summon Malami, other witnesses' and other digital content on this website, may not be reproduced, published, broadcast, rewritten or redistributed in whole or in part without prior express written permission from Anambra City News.