Anyim was released on Tuesday afternoon after his lawyers perfected all the bail conditions imposed by the anti graft agency. 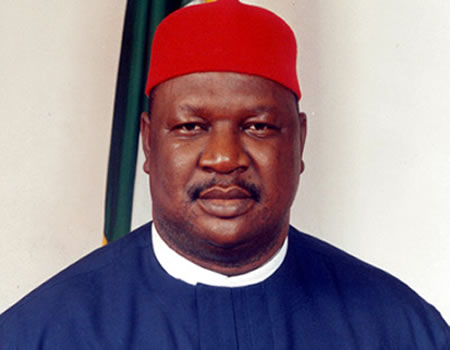 Former Secretary to the Government of the Federation (SGF), Sen. Anyim Pius Anyim has been released from the Economic and Financial Crimes Commission (EFCC).

Anyim was released on Tuesday afternoon after his lawyers perfected all the bail conditions imposed by the anti graft agency.

Anyim who was also a former President of the Senate and a prominent leader of the opposition Peoples Democratic Party (PDP) was on Sunday invited by operatives of the EFCC to shed more light on alleged slush fund traced to a company he was found to be a director in.

Sources familiar with the EFCC matter told the EPARLIAMENT that the invitation of the ebullient politician was also related to the ongoing trial of former minister of aviation and lawmaker representing Anambra North in the Senate, Stella Odua who recently defected to the ruling All Progressive Congress (APC) from the PDP.

Also, reacting to the invitation of Sen. Anyim, a former member of the House of Representatives  and an ally of the former SGF, Hon. Linus Okorie in an earlier statement stated that the invitation of Anyim was more political than a fight against corruption.

Okorie opined that the critical role Sen. Anyim was playing in the upsurge of the PDP ahead of the 2023 general elections was certainly giving some of people serious concerns.  He believes that some powerful people may be trying to demoralize Anyim in order to dissuade him from full participation in the next election season especially as the PDP may zone its presidential ticket to the Southeast.