Malami Finally Opens Up, Reveals Why Suspected Terror Sponsors Will Not Be Made Public 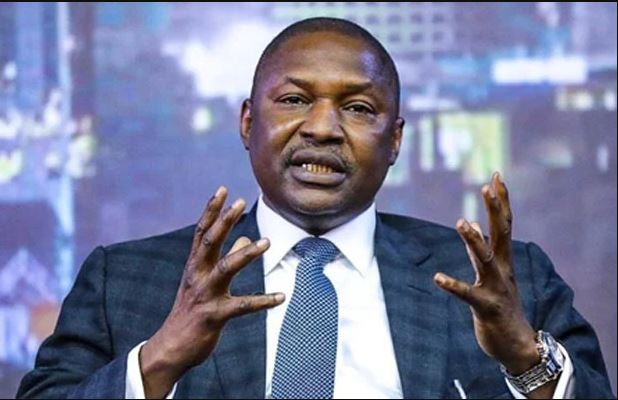 The Federal Government would not adopt the policy of naming and shaming in disclosing the identities of identified suspected financiers of terrorism activities, the Attorney General of the Federation (AGF) and Minister of Justice, Abubakar Malami has said.

This, Malami said, was because the Federal Government acknowledges the constitutional right of such suspects to the presumption of innocence and would rather charge them to court for their identities to be made public in court.

The Federal Government has, for some months now, announced its arrest of some financiers of terrorism,among who it claimed, are bureau de change operators.

Malami said the Complex Case Group (CCDG) of the Department of Public Prosecution of the Federation (DPP) in the Federal Ministry of Justice has reviewed over 1000 boko haram case files out of which 285 have been charged before the Federal High Court based on prima facie cases of terrorism against them.

He explained that the prosecution of such cases was delayed because of the COVID-19 lock down, Judiciary Staff Union (JUSUN) strike and court vacation.

Malami, according to a statement by his Special Assistant on Media and Public Relations, Umar Gwandu, spoke while addressing journalists on the sideline of the ongoing 76th session of the United Nations General Assembly in New York.

Gwandu quoted Malami as saying: “Naming and shaming of suspects is not embarked upon as a policy by the federal Government out of sheer respect the constitutional rights of Nigerians relating to presumption of innocence.

“It is a product of constitutionalism and the law. It is rooted in the law and the names of the suspects will accordingly be made public at the point of judicial arraignment while the shaming remains a consequence of judicial conviction.

“Trials are judicial process and not about media sensations. Naming and shaming, in the Nigerian context, must be rooted in constitutionalism.