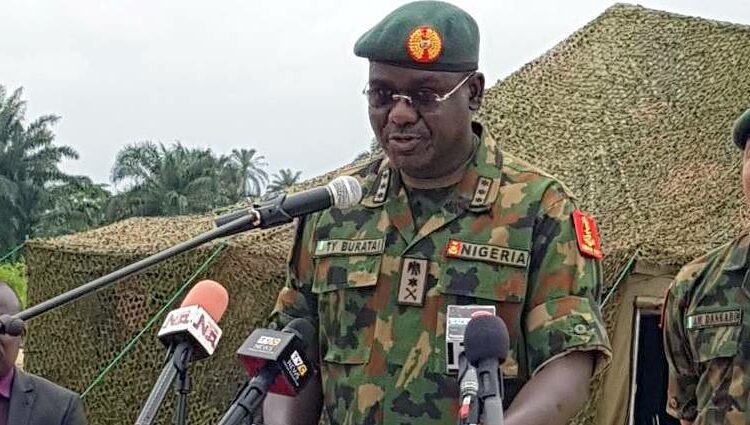 Unhappy with the activities of bandits in the North-West zone of the country, the Chief of Army Staff, Lt. Gen. Tukur Buratai on Saturday declared that the Nigerian Army will not rest until the country was completely rid of banditry.

He said the army will fish out and kill the bandits who have been terrorizing the people.

Speaking when he visited the Army Super camp four, Faskari, in Katsina State which is the operational base of the troops in the Northwest, Buratai said no efforts will be spared in dealing with the bandits, adding that criminals of all sorts will be dealt with ruthlessly.

He said from July 6 to September 12 this year, hundreds of bandits were neutralised, others arrested, while a large number of informants were also arrested from Katsina, Sokoto, and Zamfara States under Operation Sahel Sanity.

He urged residents not to relent in disclosing the identities of criminals in their communities, insisting this would assist in ensuring security in the country.

“The bandits and other criminals are not spirits. They live among people.  Let me assure you, we shall continue to be ruthless with the criminals. We are determined to work harder along with the support of other sister agencies to achieve peace in Nigeria.

“But, the earlier these criminals are not shielded, the sooner we will win the insecurity challenges. I will urge our people especially in the communities our men are in operation to always supply us with credible information on the criminals so that together we will win the battle against insecurity,” he said.

One of the media officers at the base, Major Adamu Ngulde, had earlier while briefing the chief of army staff, disclosed that the troops had killed 103 bandits and arrested 149 others in the last two months of the commencement of the operation.

He also disclosed that the troops arrested thirty-nine informants and collaborators of the bandits.