Exercise Golden Dawn, according the Commander 302 Artillery Regiment (General Support) Col. Abdulkarim .B. Usman, in the welcome address he presented at the flag off ceremony at Igbariam, Anambra East Local Government Area, is apart from serving as an avenue to combat insecurity in Anambra State, and foster inter agency cooperation, it’s also a routine training exercise in various geopolitical zones of Nigeria and South Eastern States. 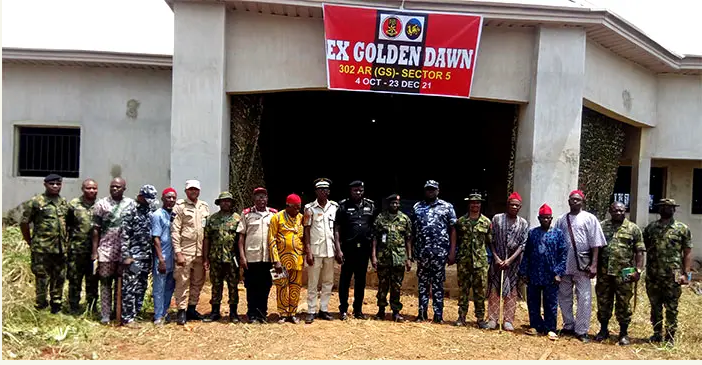 Determined to restore security in Anambra State, the 302 Artillery Regiment General Support, has lunched ‘Exercise Golden Dawn’, to provide security in the state.

Exercise Golden Dawn, according the Commander 302 Artillery Regiment (General Support) Col. Abdulkarim .B. Usman, in the welcome address he presented at the flag off ceremony at Igbariam, Anambra East Local Government Area, is apart from serving as an avenue to combat insecurity in Anambra State, and foster inter agency cooperation, it’s also a routine training exercise in various geopolitical zones of Nigeria and South Eastern States.

He said that the rise of insecurity across the country has made it imperative that the Nigerian Army comes to the aid of civil authority in joint environment, adding that the exercise which commenced on October 4th to end on December 23rd, 2021, is meant to train command and staff of combat arms and services in planning and conduct of Military Operation Other Than War, MOOTW, to confront security challenges within their area of responsibility in conjunction with other security agencies.

“The military will use the golden opportunity in conjunction with other security agencies to curb the existing security threats in Anambra State. The threat ranges from secessionist agitations, by the Movement for the Actualization of Sovereign State of Biafra, MASSOB, the Indigenous People of Biafra, IPOB and Eastern Security Network, ESN.

Col. Usman thanked the troops and other security agencies for the tremendous effort in keeping Anambra State safe and secure, adding that more needs to be done to combat the highlighted security threats in the state.

He further disclosed that the Regiment under the leadership of Major General T. A Lagbaja is currently undergoing unprecedented changes. The Regiment and indeed 82 Division have continued to benefit immensely from the Chief of Army Staff, COAS transformational drive.

“Remarkable improvements have been recorded, particularly in the refurbishment of Armoured Fighting Vehicles, procurement of new platforms, upgrading of training facilities and construction of new accommodation for officers and soldiers among others.

“These transformational efforts have greatly enhanced the welfare and operational capabilities of the troops. It is therefore my fervent hope that the exercise will record successes.”

He however urged all the sister security agencies and the people of Igbariam community to participate and cooperate with them for the success of the Exercise.

The Caretaker President General of Igbariam Community Chief Anthony Obueh, who led elders of Igbariam community to the flag off ceremony, said that the presence of the Military in the community has given them confidence that there will be absolute peace and security in the state, the community and its environs.

He promised that they will give the military all the cooperation they need to make the exercise a success.

We Were Never One Country – Bukola Saraki