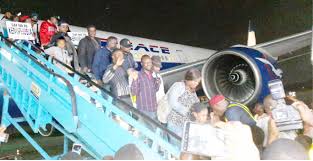 The Edo State Government has received and reintegrated 18 indigenes of the state, made up of 17 young girls and a year-old male child, who were stranded in Mali.

Attorney General of the state and Commissioner for Justice, Hon. Mrs. Yinka Omorogbe, who disclosed this to journalists in Benin City, said the returnees comprised irregular migrants and victims of human trafficking.

Omorogbe said the Governor Godwin Obaseki-led administration has in the last three years and eight months stemmed the scourge of illegal migration through massive investment in the education sector, in addition to creating various empowerment programmes for the youths.

According to her, “We have just received 18 Malian returnees into the state. These are girls that were trafficked out of Nigeria to Mali where they were rescued. They spent some months with the High Commission in Mali before being transported back to Nigeria.

“A plane-load of girls arrived Nigeria from Mali; among these people are 18 persons; including 17 young girls and a little baby boy, that are either from Edo State or reside in the state.”

The commissioner reassured the commitment of the state government to the welfare and wellbeing of the returnees, noting that over the years the government has ensured the rehabilitation and reintegration of the returnees by assisting them acquire skills through training and retraining programmes as well as the provision of loans and payment of stipends for start-ups.

She added: “The Edo State Task Force Against Human Trafficking as usual brought them back to Benin. Ever since we started operations in early November 2017, the task force has been on ground to receive every Edo indigene brought back into the country.

“These people just returned and we have taken and stored their information in our database; they will be incorporated into our numerous programmes initiated by the Obaseki-led administration to make them independent and employable.”

All rights reserved. This post: 'Edo receives 18 returnees from Mali' and other digital content on this website, may not be reproduced, published, broadcast, rewritten or redistributed in whole or in part without prior express written permission from Anambra City News.