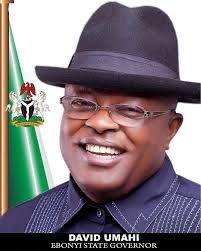 The suspension hammer also fell on the Auditor General in charge of Local Government Areas in the State, Mr. George Ukpai.

The letters announcing their indefinite suspensions were handed to them on Monday.

Secretary to Ebonyi state government, Dr Kenneth Ugbala, in a release made available to newsmen in Abakaliki, said the suspension was with immediate effect.

They were said to have failed in the discharge of their duties.

The suspension was also for their alleged inability to prepare and produce the annual audited accounts of the State and Local governments.

The release asked Nweda to hand over to the next most senior officer in rank.

He ordered one Dr U. A. Udu to take over as Acting Auditor General for local government until further notice.

“All handover and takeover should be concluded before the close of work on Monday 13 July 2020”, according to the statement.