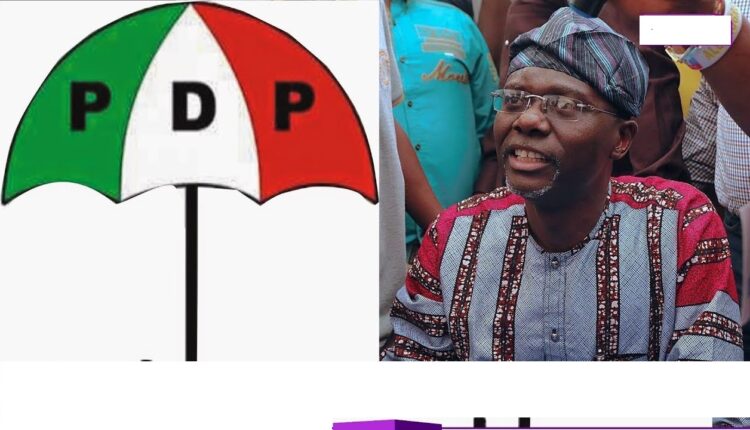 *** vows to involve EFCC if Lagos fund is diverted

The Lagos State chapter of the Peoples Democratic Party (PDP) has asked Governor Babajide Sanwo-Olu to reject his appointment as the Head of the APC Ondo State Governorship campaign council, insisting that it was an indirect way of asking him to finance the election.

The party in a statement by its spokesperson, Gani Taofik, titled ‘Resist wasting Lagos funds on Ondo” on Wednesday described the governor’s appointment as a ‘Greek gift’ targeted at making the governor to use Lagos funds for the governorship contest in Ondo state.

The party therefore warned the governor against spending funds belonging to the state on the upcoming governorship elections in Ondo and Edo states, maintaining that rather than embark on campaign spree in Ondo, the governor should concentrate on his much-touted quest to improve the state development.

The statement read, “The selection of Sanwoolu as Head of the APC Ondo State Governorship campaign council cannot be for his political experience but because the APC intends to use Lagos funds to run the Ondo elections.

“The party urges the Lagos State Commissioner for Finance and the Accountant General to prepare for accountability within this period of Edo and Ondo elections.

“We will invite EFCC and also support the legal protest against this selection targeted at diverting Lagos taxes in the face of colossal infrastructure inadequacies begging for attention in the state.

“Governor Sanwoolu should show empathy to Lagosians by rejecting the Greek gift selection as head of the APC campaign council, so as to concentrate on his much-touted quest to improve the state development.

“For the PDP, the state will be further plunged into avoidable debts and infrastructure deficits if the governor delves into such party assignments obviously distractive and prodigal at this time.”

All rights reserved. This post: 'Ondo 2020: Sanwo-Olu’s appointment, a Greek gift targeted at Lagos funds says PDP' and other digital content on this website, may not be reproduced, published, broadcast, rewritten or redistributed in whole or in part without prior express written permission from Anambra City News.

Tonto Dikeh thanks fans for her latest appointment