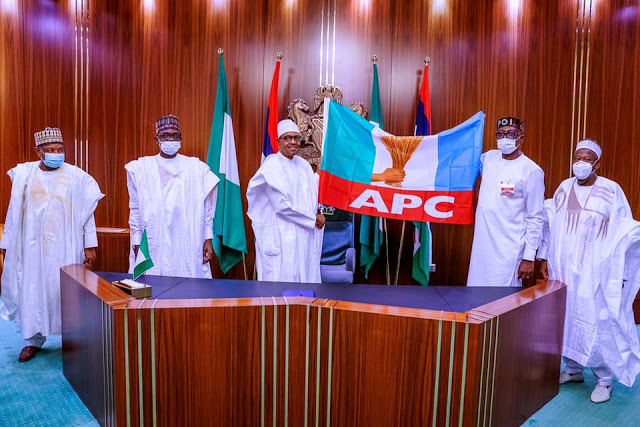 Notable leaders of the All Progressives Congress (APC) including nine of its governors, the Deputy Senate President, Ovie Omo-Agege and ministers among others literally shut down Benin, the Edo State capital as the party formally launched its campaign for the September 19th 2020 governorship election.

Among those who stormed the state include Governors of Kano, Jigawa, Kebbi, Kaduna, Lagos, Niger, Ogun, Osun, Ondo and Imo states. Kogi was represented by the Deputy Governor.

Others included Minister of Transport, Rotimi Amaeachi, Minister of State for Budget and Economic Planning, Prince Clem Agba and his counterpart in the Steel Ministry, Uche Oga.

The former National chairman of the APC, Comrade Adams Oshiomhole, his deputy when he was governor of the state, Dr Pius Odubu who was a governorship aspirant of the party, two other former aspirants, Egr Chris Ogienmwonyi and Major General Charles Airhaivbere (rtd), former deputy governor, Lucky Imasuen and several chieftains of the party across the state graced the event.

However, the former national chairman of the party, Chief John Oyegun and a former governor of the state, Professor Oserheimen Osunbor who had publicly pledged their support for Governor Godwin Obaseki before he left the party were conspicuously missing at the event.

Before storming the sports complex of the University of Benin where the formal flag-off took place, the party leaders had visited the palace of the Oba of Benin where they were received by His Royal Majesty, Omo N’Oba N’Edo Uku Akpolokpolo, Oba Ewuare II who again called for a peaceful election.

Addressing party faithful during the campaign launch, the chairman of the APC Campaign Council, Governor Abdulahi Ganduje said the party would win the election but preached against violence during campaigns.

“Our council have spent precious time and we completed arrangements for s successful election and insha Allah, we will win this election.  Our responsibility is to create an enabling environment for the mobilisation of voters, for the presentation of our candidate and his manifesto especially his SIMPLE agenda for the good people of Edo state.

“We are highly impressed with the performance of the election committee at the state level, we are impressed by the campaign going on from hamlet to hamlet, village to village, from town to town. From the crowd we have seen we have to conclude that this election will be won by the APC.”

On the newly sworn members of the house of assembly, Ganduje said “I have to also congratulate you for the swearing in of 14 elected state assembly members. In-fact we were astonished, we were surprised, we were shocked that for thirteen good months 14 members were not sworn in but now we are succeeding.

“Three other legislators with the new Speaker can now say we have a successful team. 17 is more than three quarters of the members.”

On his part, chairman Caretaker Committee/Special Convention of the APC, Governor of Yobe state, Mai Mala Buni urged the people to eschew violence bur campaign and win the election for the party.

“We are here to admonish you not to be violent throughout the campaigns and the election because victory is ours. We are here and not to fight but we must ensure that every vote must count”

Shortly after being presented with the party flag and broom, the candidate of the party, Pastor Osagie Ize-Iyamu said: “with the people you have seen with me today, can anybody say we are in opposition?

“I want to assure you that in this election, we will not only win, we will win the eighteen local government areas.

On his part, Oshiomhole described Obaseki’s government as an MoU government that denigrated the young people of Edo state.