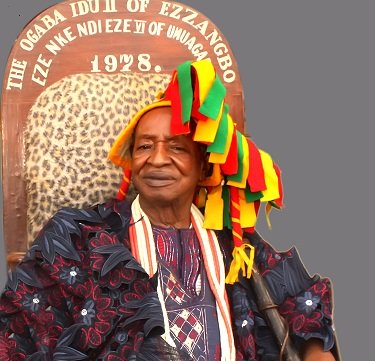 Until his death, Eze Agbo was the Ogaba Idu II of Izhia Kingdom, in Ohaukwu local government area.

He reportedly passed on at the age of 81 years after 42 years on the throne. He ascended the Izhia kingdom traditional stool in 1978.

His death was announced by his family and cabinet at his palace on Tuesday amidst tears and weeping by all present.

His Eldest Son, Prince Chinedu Chibueze Agbo who announced his death noted that the Community has lost its leader.

“The great protector of our people has gone to the great beyond”, he wailed.

One of his sons and former Governorship candidate of the Social Democratic Party (SDP), Prince Ndubuisi Chibueze Agbo described the late monarch as an enigma and collossus.

Prince Agbo, who was also a former Commissioner for Education in the state, noted that the family is grateful that he left a lot of legacies for the family and the kingdom to remember him with.

“He was among the founding fathers of Ebonyi State. He was the treasurer of the Ebonyi state movement. He also attracted the College of Medicine to Abakaliki when the state was part of Enugu state amongst other legacies”

The traditional Prime Minister of the palace, Chief Emmanuel Onweaka also eulogised the late monarch describing him as a peacemaker.

He announced that the burial will take place on November 28.

All rights reserved. This post: 'Ebonyi foremost Royal Father, Agbo dies at 81' and other digital content on this website, may not be reproduced, published, broadcast, rewritten or redistributed in whole or in part without prior express written permission from Anambra City News.