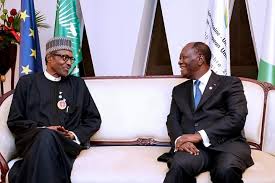 The presidential candidate of the L’Alternative-CI and leader of the opposition parties in Cote D’Ivoire, Mr. Seth Koko has asked the Economic Community of West African States (ECOWAS) and President Muhammadu Buhari in particular to prevail on President Alassane Ouattara to step down to avoid plunging the country into a civil war.

He claimed that having completed his constitutionally provided two-terms as the president of the West African country, Ouattara was no longer eligible to seek for a third term.

Apart from seeking the withdrawal of Ouattara from the October 31 Presidential Election, Koko who briefed newsmen in Abuja also called for the immediate dissolution of the Independent Electoral Commission, accusing the electoral body of compromise.

He said Ouattara’s third term ambition in clear violation of the constitution will be totally rejected by the opposition parties, asking the regional body and its leaders to quickly intervene before the situation degenerates to an unmanageable level.

He further accused the IEC of lacking the moral standpoint to conduct an acceptable election in the country having remained a tool in the hands of the ruling party, Rally of Houphouëtists for Democracy and Peace for a long time.

He also demanded for the postponement of the election.

“The opposition parties are appealing to international bodies to stop Ouattara from seeking a third term which is a violation of the constitution.

“His tenure ends on October 31 and we will not allow him to extend his tenure behind that date; we will not make it easy for him, we would encourage civil disobedience and would not recognize him as president.

“We are going to make the country ungovernable for him if he insists on contesting because he ceases to be the president from October 31. We will defend the constitution of Cote D’Ivoire.

“If we allow him to violate the constitution; even, if he stays for 100 years, he would continue to stay in office. This is the time for all those who have an investment in Cote D’Ivoire like Nigeria and others to stop Ouattara.”

All rights reserved. This post: 'Cote D’Ivoire Presidential Election: Opposition parties threaten showdown with Ouattara over ‘third term bid’' and other digital content on this website, may not be reproduced, published, broadcast, rewritten or redistributed in whole or in part without prior express written permission from Anambra City News.