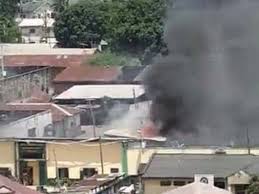 No fewer than 58 inmates at the National Correctional Service Centre in Okitipupa, Ondo State were on Thursday released when suspected hoodlums attacked the facility.

The attackers also burnt a vehicle in the process.

It was also learnt that several items were destroyed on the premises of the prison.

The Public Relations Officer of the Ondo State Command of NCS, Ogundare Babatunde, confirmed the incident.

A video sent to our correspondent by an eyewitness shows smoke billowing from parts of the centre while inmates are seen running.

It was learnt that the prison authorities had immediately notified the police and the military authorities for backup.

“I can see them from my balcony at the moment. Soldiers and policemen have arrived. I saw prisoners throwing stones and I saw fire.

Our correspondent also heard gunshots emanating from the prisons.

The Police Public Relations Officer, Lagos State, Mr. Muyiwa Adejobi, said the cause of the fire could not yet be ascertained but policemen had been deployed in the prisons.

“We don’t know the cause of the fire but we are there on the ground. We have mobilised to the place. We will give details later,” he said.

All rights reserved. This post: 'Hoodlums attack Ondo prison, free 58 inmates, as soldiers, police foil jailbreak at Ikoyi prison' and other digital content on this website, may not be reproduced, published, broadcast, rewritten or redistributed in whole or in part without prior express written permission from Anambra City News.