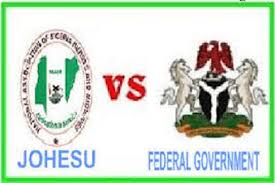 The planned industrial action by the Joint Health Sector Unions (JOHESU) may be suspended following a truce reached between the federal government and the health union on Friday.

The strike action which was initially scheduled to commence on Sunday, may be put on hold as the union agreed to consult its members on the agreement it reached with the government and report back to the Ministry of Labour by tomorrow.

The health union had raised avalanche of issues facing the sector, chief among which was the nonchalance attitude of the federal government to the plight of health workers and therefore threatened to down tool if nothing was done to assuage them before Sunday.

At the end of extensive meeting with the government, it was gathered that the federal government has appropriated N126 billion in the 2020 COVID-19 intervention Appropriation Act for infrastructure upgrading and equipment for the health, noting that lack of effective communication made it impossible for the unions to appreciate the degree of investments made in the sector.

At the meeting attended by the Minister of Labour and Employment, Chris Ngige; Minister of State, Labour, Festus Keyamo (SAN); Minister of State, Health, Olorunnimbe Mamora; JOHESU Chairman, Biobelemoye Josiah and other officials, it was agreed that the unions should be carried along in the affairs of the Presidential Task Force on COVID-19 to ensure proper communication.

They further agreed, in a communiqué that the private sector engagement should also be encouraged as this would add value to the health sector investment generally.

On the implementation of the Special COVID-19 Hazard and Inducement Allowance in which JOHESU alleged that many of its members were either omitted or short-paid, the meeting agreed that the Federal Ministry of Health should issue a circular to the Chief Medical Directors of the various Health Institutions by Friday, September 11 requesting them to forward the list of members affected by the shortfall to the ministry by Monday.

JOHESU was also asked to mobilise their members in the local chapters of the tertiary Health Institutions to ensure that the CMDs forward the list of their members to the ministry to facilitate the payment.

On the issue of medical personnel in the education sector that wwere not captured in the first tranche of payments, the communique noted that this omission was not peculiar to JOHESU members alone.

The health minister said he would consult with the relevant ministers on how to address the issue as clinics/hospitals under Federal Ministries of Education, Justice and Defence were equally affected.

The statement noted, “On the request by JOHESU that all health workers who hitherto were being paid N5000 as hazard allowance should be the beneficiaries of the 50 per cent of their consolidated basic salary as Special COVID-19 Hazard and Inducement allowance, irrespective of whether they are or non-core medical professionals; the minister of labour and employment explained that the MoU of April 2020 in 1(d) was explicit on this.

“However, the meeting agreed that this category of workers should be compiled by FMoH and the attendant financial implication should be computed by the office of the Accountant-General of the Federation to see if this request can be accommodated within the available funds because they were not in the original classification for 50 per cent.”

Regarding the adjustment of the Consolidated Health Salary Structure as was done with Consolidated Medical Salary Structure since 2014, the meeting noted that the matter had been earlier referred to the National Industrial Court of Nigeria and is one of the issues that cannot be resolved by consensus at the Alternative Dispute Resolution mechanism.

The meeting adjourned till October 15 to enable the health ministry to carry out the assignments.

All rights reserved. This post: 'Health workers, FG reach truce, may shelve strike' and other digital content on this website, may not be reproduced, published, broadcast, rewritten or redistributed in whole or in part without prior express written permission from Anambra City News.