WTO: Okonjo-Iweala May Resign If There Is No Headway On Critical Issues.

Last year, Okonjo-Iweala’s predecessor -- Roberto Azevedo -- cited the lack of progress at the WTO as his primary reason for resigning from the organization a year before his tenure was scheduled to end. 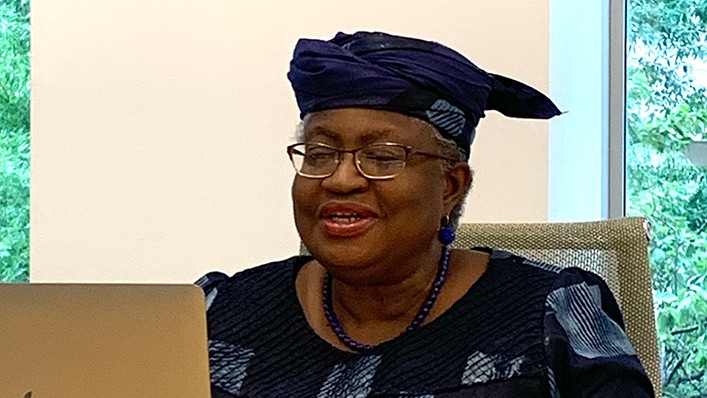 Ngozi Okonjo-Iweala, the leader of the World Trade Organization, began the year with a plan to score quick negotiating victories that she said would help reboot the dysfunctional Geneva-based trade body.

Now, seven months into her 4 1/2-year term, Okonjo-Iweala has fully grasped the frustrating reality of the WTO’s historical inertia, even privately floating the idea of resigning if no headway can be found on critical issues, according to five trade officials in Geneva who declined to be identified.

This year, Okonjo-Iweala has repeatedly told ambassadors and staff that she could easily walk away from the job, and reminds them she hasn’t bought any furniture for her temporary home in Geneva, the officials said.

An early departure of the WTO’s top trade official would add yet another layer of chaos to an organization suffering from an existential crisis that may lead governments to conclude the WTO is not a credible forum for addressing their shared challenges.

Deep divisions and a lack of trust are not new for the WTO, which requires consensus agreement among all 164 members to finalise multilateral accords.

The WTO’s rigid negotiating structure and disparate interests of its diverse membership have precluded the organization from delivering anything substantial for the better part of the past decade.

Last year, Okonjo-Iweala’s predecessor — Roberto Azevedo — cited the lack of progress at the WTO as his primary reason for resigning from the organization a year before his tenure was scheduled to end.

Some Geneva trade officials told Bloomberg News that they suspect Okonjo-Iweala wants to run in the 2023 Presidential election in her native country of Nigeria.

Okonjo-Iweala didn’t comment about her threats to resign but denied any interest in running for the Nigerian presidency, calling such speculation “utterly ridiculous and not true” in a statement to Bloomberg News.

“I just got here. I am enjoying what I’m doing,” she told Bloomberg News in a television interview. “It is a very exciting job and I am trying to have some successes here.”

WTO members selected Okonjo-Iweala to be their top trade official on the premise that her energy, ministerial experience and political influence might provide the kind of leadership needed to shake up the beleaguered trade organization.

Okonjo-Iweala arrived with the qualifications of a political heavyweight. With her background as a former developmental economist, a high-ranking World Bank alumnus and the former Director of vaccine alliance GAVI — she is among the most qualified people to lead the organization’s effort to address the Covid-19 vaccine crisis.

Her star has continued to rise since becoming WTO Director-General and her focus on vaccine equity has put it in the center of one of the hottest international debates of the pandemic era.

This month, she was selected for the cover of Time Magazine’s top 100 influential people.

The true test of Okonjo-Iweala’s leadership will come in November, when she hosts the WTO’s 12th ministerial conference — a gathering of the organization’s highest decision-making body.

To date, WTO members have failed to make significant headway on the three priority areas Okonjo-Iweala identified for potential outcomes at the biennial meeting:

a pledge to reduce trade-distorting agricultural policies; and

and a framework to expand global trade in vaccines, therapeutics and diagnostics.

It’s not for a lack of trying. She has held scores of high-level meetings, interviews and ministerial-level events aimed at rallying WTO members to reach consensus agreements.

With two months remaining before the ministerial meeting, business and government officials are growing openly pessimistic about the ability of WTO members to agree to anything.
Nevertheless, they continue to support Okonjo-Iweala’s efforts and have encouraged her to see the job through.

“The idea of Dr. Ngozi stepping down early would be anathema to the business community,” Secretary General of the International Chamber of Commerce John Denton said in an interview. “We have backed her forward-looking agenda, we want her to commit and maintain that.

“We see no reason why she would even be thinking about ending her term and frankly — she has told us point blank that she is not.”