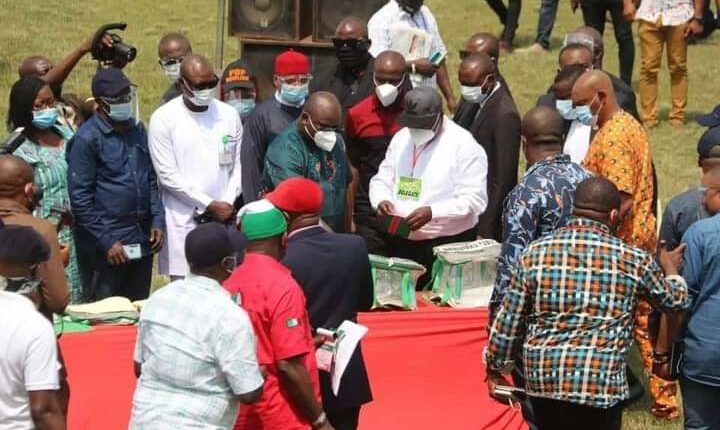 Former Speaker of the Abia State House of Assembly, Rt Hon Asiforo Okere has emerged as the new chairman of the Peoples Democratic Party (PDP) in the state.

Most of the executives of the party also returned at the party’s state congress held at Umuahia Township Stadium in the state capital..

Speaking at the event, Governor Okezie Ikpeazu charged newly elected Executives to work to take the party higher and ensure victory for her at elections.

Ikpeazu charged the newly elected party executives to begin their work immediately and ensure they win new members and galvanize support for the party as the task for winning elections cannot be taken for granted despite the party having consistently won elections in the State.

He reminded the executives that the party, being the hope of Nigerians in the next general elections, has a very demanding task ahead and called for all hands to be on deck to achieve the set objectives.

He stated that the event was supposed to be a joyful moment for the party but for the loss of three of her illustrious members in the persons of Late Chief Johnson Onuigbo, who led the party to victory in 2015 and 2019, Dr. Solomon Ogunji and Sir Allen Nwachukwu, and prayed for their souls to find rest in the bosom of the Lord.

While assuring them of his support at all times, the Governor reminded the new executives that they have been elected to serve the people and not the other way round. He therefore called on members of the party to also cooperate with and support the executives to enable them deliver on their mandate.

Addressing those who feel aggrieved over one issue or the other, the Governor urged them to always seek redress through the appropriate channels in the party.

He lauded members of the congress organising committee led by Rt Hon. Kenneth Okon for a job well done despite how painstaking it was. He noted that the smooth conduct of the congress in Abia shows that Abia State is unarguably a peaceful State.

Speaking earlier, the party’s National Organising Secretary, Colonel Austin Akobundu (Rtd) noted that the party is known for being peaceful and urged all delegates to vote in an orderly manner to elect a new executive that will take the party to a new height.

He disclosed that a lot of work needs to be done as a new administration will be installed at all levels.

He also assured the Governor of maximum support from members of the Party.

Also speaking, the acting State Chairman of PDP, Chief P. C. Onyegbu, called on the executives to ensure they unite the party as one and shun strife and discord.

All rights reserved. This post: 'Ex-Speaker, Okere emerges as Abia PDP chairman' and other digital content on this website, may not be reproduced, published, broadcast, rewritten or redistributed in whole or in part without prior express written permission from Anambra City News.