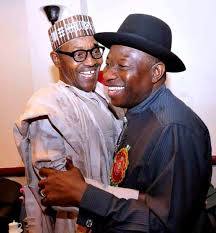 *** brief president on crisis in Mali

Former President Goodluck Jonathan says his relationship with President Muhammadu Byhari remains cordial, even as commended the president for making it priority to complete projects of previous administrations.

Dr Jonathan who is the ECOWAS Special Envoy to Mali was at the Presidential Villa, Abuja to brief President Buhari on the activities of his committee in a bid to resolve the political crisis in Republic of Mali.

He told State House Correspondents that his relationship with the president had remained cordial, adding “You’ve been seeing me coming and you have been seeing us having friendly conversations. So, our relationship is ok.”
He said the completion of those projects was the way to go, even as he expressed gratitude to the president for naming the largest station on the Warri-Itakpe railway route –the Agbor railway facility and station – after him.

The former president said he had already written a letter of appreciation to President Buhari, praised and commended him for carrying on with the railway programme and other legacy projects inherited from previous administrations.

“Let me use this opportunity to commend Mr. President publicly for naming that legacy project after me. I’ve already sent a letter to appreciating. It’s a good gesture.

“And completing the railway programme is good. It shows that the President is doing, is going on with the legacy projects of the previous administrations. That is the way to go.

“I sent a letter to him. I commended him verbally too but you are asking me now. Let me also do it publicly. I appreciate it, I thank Mr. President, the Minister of Transportation and others that made it possible.”

The former President, who was in the company of President of ECOWAS Commission, Mr Jean-Claude Kassi Brou, also took time to brief the president about his assignment to Mali.

“ECOWAS can’t preside over the removal of an elected President. Not even the African Union (AU), or the United Nations (UN) can do it. Leaders must be elected and leave under constitutional processes, otherwise, we would have Banana republics all over the place.”

It could be recalled that there were protests against Mali’s President, Ibrahim Boubacar Keita, who has spent two out of the five years second term in office.

A resistance group, M5, is insisting that the Constitutional Court must be dissolved, and the President resign before peace can return to the country. Crisis had erupted after the court nullified results of 31 parliamentary seats in the polls held recently, awarding victory to some other contenders, which the resistance group said was at the instigation of President Keita.

Riots on July 10 had led to the killing of some protesters by security agents, causing the crisis to spiral out of control, hence the intervention by ECOWAS.

The former President thanked President Buhari for providing a Presidential jet for the mission, “thus making our trips convenient and comfortable,” and he equally expressed appreciation for the Itakpe-Warri railway complex named after him last weekend.

President Buhari told his guests that he will consult with key leaders of ECOWAS countries in order to find a solution to the crisis rocking Republic of Mali.

According to him, “We will ask the President of Niger, who is the Chairman of ECOWAS to brief us as a group, and we will then know the way forward.”

He thanked Dr Jonathan for his comprehensive brief on the situation in Mali, “which you had been abreast with since when you were the sitting Nigerian President.”