*** We must apprehend the killers says Afunanya

The Department of State Services (DSS) says it has put all measures in place to unmask those behind the violent clash with members of the proscribed Indigenous Peoples of Biafra (IPOB) which claimed the lives of two of its personnel at Emene, Enugu state on Sunday.

This came as the IPOB on their part claimed that 21 of their members were killed while 47 others were arrested during the bloodbath.

But, the DSS in a statement by its Public Relations Officer, Dr Peter Afunanya, lamented that there was no reason to justify what it described as an unprovoked violent attack on its patrol team in Enugu by members of the outlawed group.

The service therefore noted that no efforts will be spared in ensuring that the killers of its personnel and everyone involved in the dastardly act are promptly apprehended and brought to justice, adding that a full scale investigation will be carried out. 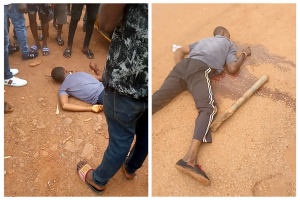 “The DSS wishes to inform the public that its patrol team was, today, 23rd August, 2020, attacked in Emene, Enugu State by members of the outlawed Indigenous People of Biafra (IPOB).

“The Service lost two personnel in what was clearly an unprovoked violent attack launched by IPOB on the team.  The Service hereby condoles with families of the departed officers and also prays for the repose of their souls.

“Once again, the Service reaffirms its commitment to assiduously work with other security agencies to maintain public safety and order. It, therefore urges law abiding citizens and residents to go about their normal businesses without fear.

On its part, the IPOB in a statement by its Media and Publicity Secretary, Emme Powerful lamented vowed that it will ‘reciprocate the rampant killing of innocent members of IPOB in due cause’.

“We MUST warn and put the whole world on notice that Nigerian Government and her security operatives should stop killing our people because we are peaceful organization with the mandate of restoring Biafra sovereignty within shortest period.

“Today, the Nigerian security personnel stormed IPOB meeting ground in Enugu and started  shooting sporadically which consumed lives of 21 members and 47 arrested for just no cause or provocation. It is unfortunate that security operatives murdered innocent members and carried their lifeless bodies to unknown locations. The security in the whole world must understand that keeping quiet and following the rule of law should not be construed as weakness on the part of IPOB. 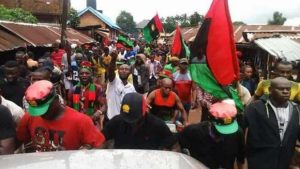 “IPOB is a well rooted movement committed fully on the pursuit for Biafra freedom and independence from Nigeria. We are not a violent group and there is nothing they can do to change our resolve to maintain peace and order in our land. The efforts of the  Nigeria Government and her partners in crime in trying to   push IPOB to change their tactics will amount to vanity.

“We are warning and asking Nigeria government and her security operatives to stop this atrocity immediately. Why have they refused to confront terrorists herdsmen, Boko Haram terrorists, ISIS and other groups ravaging the country and busy killing innocent and unarmed citizens of IPOB? 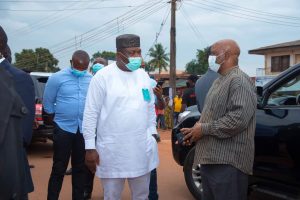 “Those responsible for this barbaric killing in Enugu today must pay for their actions against IPOB at the appropriate time. It is laughable for DSS to be claiming that they lost 5 personnel in the hands of unarmed and Peaceful people. It is clear to all that IPOB doesn’t indulge or carry arm or involve with any object.  IPOB is a peaceful movement and we must remain so till Biafra is totally achieved,” the statement noted.

All rights reserved. This post: 'Enugu clash: We lost 2 personnel says DSS, as IPOB claims 21 members killed' and other digital content on this website, may not be reproduced, published, broadcast, rewritten or redistributed in whole or in part without prior express written permission from Anambra City News.