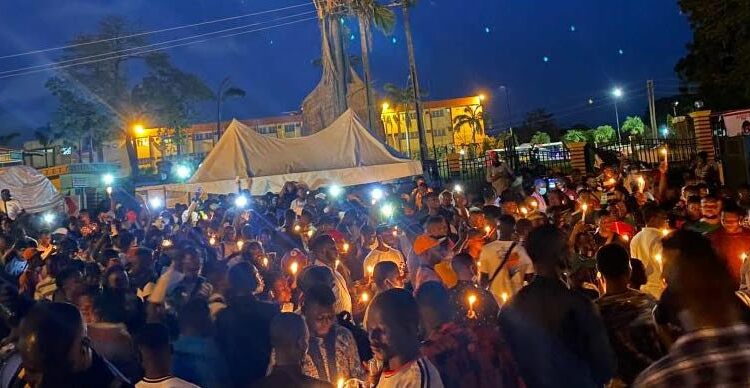 Suspected hoodlums on Tuesday invaded Waru and Wumba communities within the Federal Capital Territory as violence continues to spread across the country.

Thick smoke had enveloped the area on Tuesday showing the extent of attack in the area.

This came after tens of cars were vandalized on Monday by the hoodlums at the Apo mechanic village.

One of the affected residents, Mercy Adolo, said that residents were fleeing the community into the nearby mountains to escape attacks.

“We are under attack in Waru; as I speak with you, the thugs are going from house to house, we are not safe.”

In a bid to quell the situation, a contingent of riot policemen had been deployed in the area.

A team of policemen were also observed at the Kabusa Junction, the scene of Monday incident.

Carcasses of burnt cars littered the area while some vehicles had their windshields damaged.

A car dealer was seen crying profusely and rolling on the floor as he lamented the loss of his vehicles.

A car owner, who did not give his name, said he had a huge amount of money in his vehicle that was razed.

A victim, Babatunde Abolaji, said he was attacked with knives while attempting to prevent the hoodlums from damaging a Toyota Highlander SUV.

“I pleaded with the thugs in Hausa but they didn’t listen. They were vandalising cars. As I moved to drive away a Toyota Highlander SUV, they stabbed me in the arm and back,” he narrated as he showed his injured back and arm to our correspondent.

According to him, the boys who were speaking Hausa doused the vehicles with petrol and set them on fire.

See also  #EndSARS: ActionAid calls on Buhari to address the nation and stop the looming anarchy

“They butchered an Igbo man like an animal, killing him,” he noted, adding that 10 persons were injured by the hoodlums.

Our correspondent reports that the usually busy Apo spare parts mechanic was deserted on Tuesday as the traders failed to open for business for fear of attack.

The FCT police spokesperson, ASP Mariam Yusuf, said the command has commenced an investigation into the mayhem.