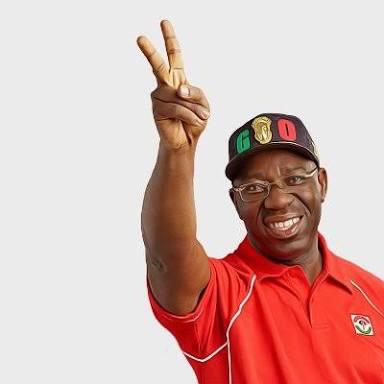 Re-elected Governor Godwin Obaseki says the next four years will be outstanding for the state as their ballot at the September 19 election was an attestation of their support for his administration to deliver more.

He stated this at Museum Ground, King’s Square after a victory walk round some major streets in Benin metropolis.

The victory walk led by PDP party stalwarts commenced from the forecourt of Government House with party faithful and supporters singing along in jubilation.

The train marched through Reservation road to Ring road, veered into Mission road on to New Benin from where it branched off to Costain road, Victory Street into New Lagos road, Akpakpava and back to Ring road.

Everywhere they passed, the people expressed excitements and sentiments that they have successfully dislodged political godfathers.

Addressing the mammoth crowd at the Museum ground, Governor Obaseki said he was overwhelmed by their massive support.

“My message to you Edo people can be summed up in two words, ‘Thank you’.”

The re-elected governor emphasized that he would do more for Edo state as he was now free from political detractors and could focus on governance.

“Your message to me is, governor, go and work for us, we have given you the mandate; nobody should disturb you because the victory was clear and total.

“So I am promising you that myself and deputy, Philip Shaibu have heard you loud and clear. We will now go back to the office and start to do the work which you have sent us to do for you.”

“Nigeria democracy can never be the same again. You have rejected the money bags, you have rejected godfathers, you have chosen the path of progress and development and that I can assure you Governor Obaseki will give to Edo state.”

All rights reserved. This post: 'Edo 2020:Jubilation as Obaseki/PDP march through the streets' and other digital content on this website, may not be reproduced, published, broadcast, rewritten or redistributed in whole or in part without prior express written permission from Anambra City News.