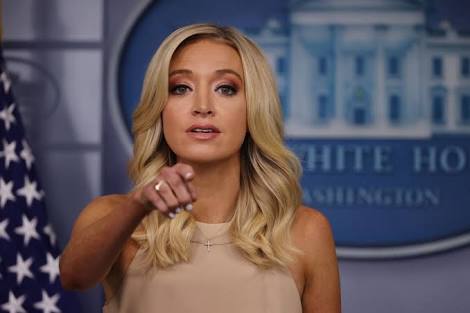 “After testing negative consistently, including every day since Thursday, I tested positive for COVID-19 on Monday morning while experiencing no symptoms. No reporters, producers or members of the press are listed as close contacts by the White House Medical Unit,” she said in a statement.

“As an essential worker, I have worked diligently to provide needed information to the American people at this time,” she continued. “With my recent positive test, I will begin the quarantine process and will continue working on behalf of the American people remotely.”

The press secretary is the latest person close to Trump to test positive for COVID-19. Trump himself tested positive late Thursday and has been undergoing treatment at Walter Reed Medical Center since Friday after experiencing symptoms.

Others in the president’s circle who have tested positive include one of his closest aides, Hope Hicks; his campaign manager, Bill Stepien; three Republican U.S. senators; and former New Jersey Gov. Chris Christie, who assisted Trump with preparation before last week’s presidential debate.

Many of those who have tested positive, including McEnany, attended a White House event on Sept. 26 during which Trump announced Amy Coney Barrett as his nominee to the Supreme Court.

McEnany did not travel with Trump to a fundraiser in New Jersey on Thursday after learning of Hicks’s test result, but she denied in her statement that she knew Hicks had tested positive when she spoke to reporters from the briefing room podium on Thursday morning.

The press secretary was seldom spotted wearing a mask for the last several months, even as public health experts said it was one of the most effective ways to limit transmission of COVID-19. After Trump revealed he had tested positive, McEnany was spotted with a mask on waiting for him to depart for the hospital on Marine One.

But on Sunday, McEnany briefly fielded questions on the White House driveway without wearing a face covering.