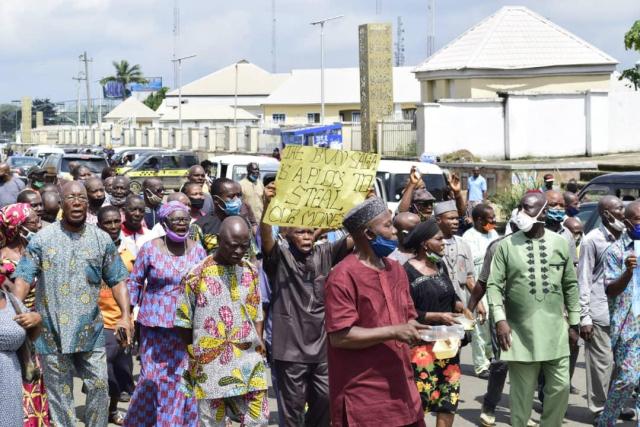 Pensioners who stormed the Imo State Government House on Tuesday to protest over non-payment of their entitlements were assaulted by thugs.

‎The pensioners have reportedly not been paid their pensions and gratuities for five months. ‎

However, the peaceful protest took a sinister turn at the gates of the government house when the hoodlums, believed to be supporters of the state government, moved to disperse the pensioners.

The thugs, who were clutching canes, ordered the pensioners to turn back but the senior citizens stood their ground.

The hoodlums then commenced flogging the pensioners in a bid to drive them away from the government house.

Eye witnesses said the shocked and terrified senior citizens were sobbing and crying in agony while they were being assaulted by the hoodlums.

A detachment of police operatives eventually arrived at the scene to disperse the thugs. ‎

Placating the pensioners, the police team urged them to channel their grievances to‎ appropriate organs of the government but the pensioners said the‎ government has been insensitive to their plight.

They also alleged that the ‎thugs were sent by the government.

They insisted that no amount of intimidation by the state government would stop them from continually demanding that their pensions and gratuities be paid.

‎Although he said it was not true that the thugs ‎flogged the pensioners, the Senior Special Assistant to the Governor on Print Media, Modestus Nwamkpa, ‎noted that the government would not tolerate illegal protests in the state.

Nwamkpa alleged that some of the protesting senior citizens are being sponsored by opposition ‎political parties.