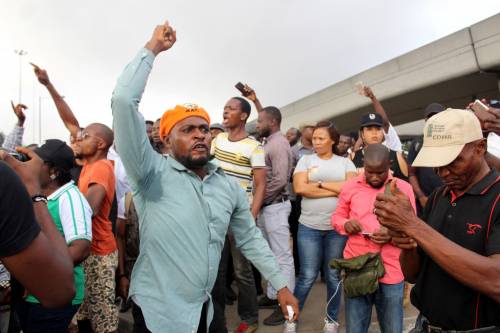 Tens of #RevolutionNow protesters in Abuja and Osogbo, Osun state have been arrested by the army, police and the Department of State Service.

The placard carrying protesters who claimed they are demanding for good governance had set out for the protests as early as 8am, but a combined team, of the police and soldiers also demonstrated their readiness to ward-off any of such protests.

The orange-coloured berets protesters carried placards and banners with such inscriptions as ‘Nigerians are sick and tired of poverty, corruption, injustice and untimely death’; ‘Say no to injustice’, ‘Yes to living wage for unemployed youths’.

They had converged on the Unity Fountain, Shehu Shagari Way, Maitama, and were about to begin their procession when policemen stormed the venue and dispersed them.

Soldiers and other security operatives also cordoned off adjoining streets including Aguiyi Ironsi Street to prevent the protesters from marching.

Human rights lawyer, Tope Akinyode, who claimed to have witnessed security agents beating protesters for no just cause, said about 29 of the protesters were arrested. 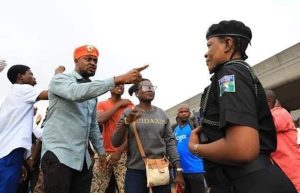 “They arrested about 29 of our people. Security officials made them to lie down and beat them. Even as a lawyer I was harassed. They pushed me around. This is very undemocratic.”

Also in Osogbo, Osun state, operatives of the DSS reportedly arrested Olawale Bakare and six others around Olaiya area in the state capital.

Bakare aka Mandate and his fellow protesters armed with placards had converged on Correspondents’ chapel of the Nigeria Union of Journalists located in the area and informed newsmen that they wanted to address them.

But while they were still trying to organize the briefing, DSS officials were said to have swooped on the protesters and arrested some of them.

All rights reserved. This post: 'Police, Soldiers, DSS arrest #RevolutionNow protesters in Abuja, Osogbo' and other digital content on this website, may not be reproduced, published, broadcast, rewritten or redistributed in whole or in part without prior express written permission from Anambra City News.