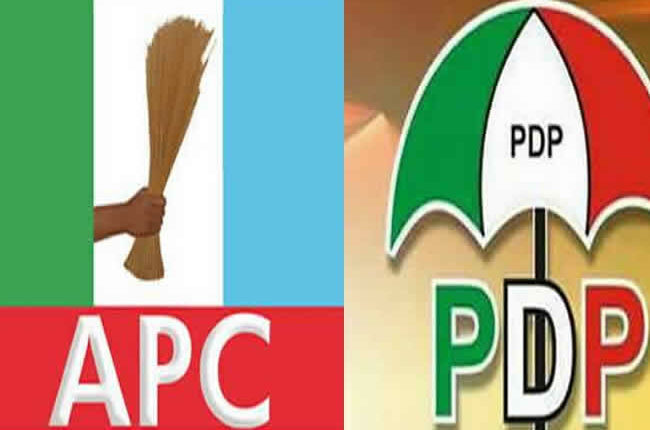 The Governing All Progressives Congress (APC) on Monday descended heavily on the opposition   Peoples Democratic Party (PDP), saying that party under its National chairman, Uche Secondus had become “shockingly rudderless”.

The party in a statement titled, ‘APC to Secondus: Opposition PDP Crumbling Under Your Watch, Credible Elections The New Normal Under Buhari,’ signed the Deputy National Publicity Secretary, Yekini Nabena, in Abuja, maintained that the APC had been busy changing the narratives.

It said the opposition party was fast crumbling, adding that instead of chasing shadows, the party should seek for ways of redeeming itself,

Nabena was reacting to a recent comment by the PDP National Chairman who took issue with the President Muhammadu Buhari, and the APC over Buhari’s comments that his regime could have used security agencies to overrun states won by the PDP in the 2019 elections but chose to support a democratic process.

The APC spokesperson urged Secondus to focus on his party “which has become shockingly rudderless under his watch”.

“Under Secondus, the PDP has never had it this bad with the opposition party’s stakeholders detached from the party activities as was witnessed with notable PDP leaders boycotting the Party’s 2019 presidential campaigns and the recent Bayelsa State Governorship bribe-for-ticket scandal that indicted Secondus.

“Little wonder, the recent months have witnessed many PDP members resign their membership due to Secondus activities which have brought the PDP to its knees.

“The PDP under Secondus is in willful denial of the obvious that under the President Muhammadu Buhari-led APC administration, free, fair and credible elections is the new normal. Voting power is fast returning to the people and the era of stolen and procured votes is fast-fading.”

“Why will the PDP under Secondus not support efforts to ensure the independence of our state institutions such as the judiciary, INEC, and our security services and ultimately deepen our democracy and improve our electioneering system?”