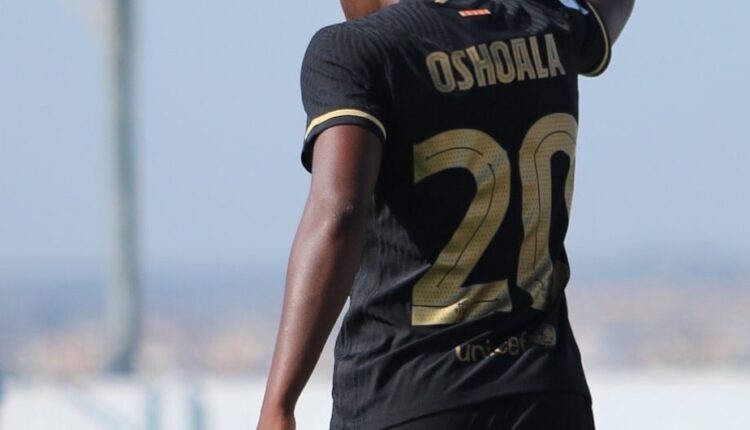 Like Victor Osimhen, Super Falcons captain, Asisat Oshoala celebrated her first goal in the 2020-21 Spanish Primera Iberdrola campaign with a fist showing her support for the ongoing #EndSARS protests in Nigeria.

Osimhen had equally celebrated his goal of the season with Napoli in their Serie A game last weekend.

The Barcelona attacker opened scoring this season against Sporting Huelva.
Just five minutes into the game, Oshoala broke the deadlock.
The game ended 6-0 in favour of Barcelona.
After scoring, Oshoala raised her right hand, bent her fingers towards the palm, and held them tightly.

She subsequently tweeted the picture, indicating her support for the #EndSARS campaign.
The reigning African Women’s Player of the Year was replaced in the 68th minute.
“You already know the vibes, #EndSARS #EndPoliceBrutalityInNigeria #3pts @FCBfemeni,” she tweeted after the match.
On Saturday, Super Eagles striker Victor Osimhen offered support to protesters against police brutality in Nigeria after he scored his first Serie A goal of the season in Napoli’s 4-1 thumping of Atalanta on Saturday.

Thousands of people have taken to the streets of Lagos, Oyo, Abuja, and other states in the country over the past week to protest against police brutality.
Osimhen, who had fired blanks in his first two league games, scored in the 43rd minute after a brace from Hirving Lozano and a strike from Matteo Politano to put Napoli into a four-goal lead before the break.
After scoring the goal, Osimhen held up a shirt with the inscription “#End Police Brutality in Nigeria” to celebrate his goal.

The 21-year-old also tweeted after the game, “Having accomplished all I thought was impossible for me through GOD, now I know better, time for some limitless goals and desire. GOD is the greatest. We move.”

All rights reserved. This post: 'Oshoala celebrates first goal of season with support for #EndSARS protests' and other digital content on this website, may not be reproduced, published, broadcast, rewritten or redistributed in whole or in part without prior express written permission from Anambra City News.