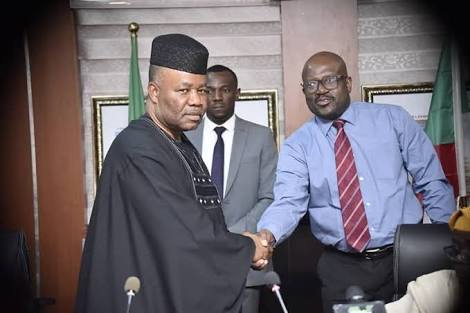 The ongoing investigation of the operations of the Niger Delta Development Commission (NDDC) assumed a new dimension, Thursday as the Commission’s Acting Managing Director, Kemebradikumo Daniel Pondei and his staff staged a walk-out on the House of Representatives Committee on NDDC.

The walk-out occured at a resumed investigative hearing organized by the House Committee on NDDC on financial malfeasance and other activities in the Commission culminating in the snail-speed development in the region since the commission’s establishment.

Pondei and his team left the venue of the hearing following the refusal of the Chairman of the Committee on NDDC, Mr. Olubumi Tunji-Ojo to recuse himself having been accused being an interested party in the matter.

They however had waited for the chairman to finished reading his speech, where reasons for the probe, were outlined, before taking off.

Pondei said the Committee chairman lacked the moral grounds to preside over a meeting.

In the midst of the obvious confusion, Hon. Shehu Koko, the chairman Committee on Airforce, raised a point of order to say the MD should not personalize the issues, but that if he has any complaint against the Chairman of the Committee, he should report at the appropriate quarters.

“If you have anything against the Chairman you can go to EFCC (Economic Financial Crimes Commission), ICPC (Independent Corrupt Practices Commission) or any of the security outfits to lay your complaints but as far as the rules of this House is concerned, you can not come here and decide how we should conduct our affairs”.

On his part, the spokesman of the House, Mr. Benjamin Kalu who was also present, agreed with him noting “there is no petition before us (House) against the Chairman’s misconduct so you can not come here and tell us how to conduct our affairs.  After all, you have a right to a fair hearing and that is why you were invited here”.

Apparently not swayed by Pondei’s position, Members of the NDDC committee, went on to pass a vote of confidence on the chairman.