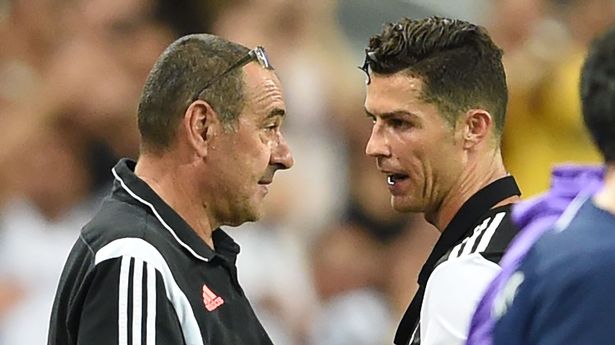 Hours after being knocked out of the Champions League in the last 16 stage to Lyon, Juventus have sacked head coach, Maurizio Sarri.

The former Chelsea and Napoli boss only took charge of Juventus in June last year, signing a three-year contract at the time, and led the side to a ninth consecutive Serie A title last month.

This came as Cristiano Ronaldo’s sister attempted to console the Juventus star after he was unable to help complete his side’s comeback against Lyon in the Champions League on Friday.

The Italian champions were still expected to progress to the quarter-finals, despite suffering a narrow 1-0 first leg defeat back in March, but their task was made doubly difficult when Memphis Depay dinked home an early penalty last night.

Ronaldo responded with a spot-kick of his own shortly before half time and set up a pulsating finale when he scored from distance on the hour mark.

Maurizio Sarri’s side toiled hard for a winning goal but ultimately exited the competition prematurely on the away goals rule, heaping further pressure on the former Chelsea manager who is likely to be replaced this summer.

Since moving to Juventus from Real Madrid two years ago, Ronaldo has scored all seven goals his side have registered in the knockout stages and his sister Elma feels the 35-year-old needs more support from his team-mates if he is to ever add another Champions League medal to his collection.

She wrote on Twitter, “You did better than anyone, dear brother. I’m proud to see you play and to see your dedication but unfortunately, you can’t do everything alone.

“You know that football is like that, but you also have to think that you did your best and that you are still the best.”

Juventus are said to be drawing up a list of potential candidates to replace Sarri which includes the likes of Zinedine Zidane, Mauricio Pochettino and Simone Inzaghi.