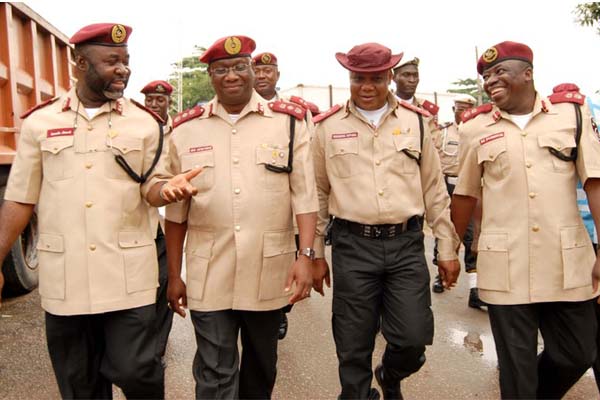 At least 18 officers of the Federal Road Safety Commission (FRSC) have been dismissed for alleged desertion, forgery, number plate racketeering, bribery, and scandalous behaviour among others.

The commission also punished 10 of its officers for other offences.

The development was contained in a statement issued by the Corps Public Education Officer, Bisi Kazeem, on Friday, titled ‘FRSC board approves the dismissal of 8, termination of the appointment of 10 and punishments for 10 other officers’.

FRSC said the dismissal was part of the efforts to rid FRSC of indiscipline and corrupt elements.

He explained that the approval was granted during the meeting of the FRSC board on Friday.

“The board of Federal Road Safety Commission has granted approval for the award of various degrees of punishment to 28 officers of the Corps in accordance with the provisions of the FRSC Regulation on Discipline.

“The sanctions consist of eight dismissals, 10 terminations of appointments, five reductions in ranks, and five loss of seniority.”

While re-emphasising the need for personnel to desist from any act of indiscipline, the Board Chairman, Bukhari Bello, was quoted as saying, “The disciplinary actions are to serve as a deterrent to others who may form the habit of contravening established regulations and tarnishing the good image of the Corps.”

Also, the Corps Marshal, Dr Boboye Oyeyemi, re-stated that his administration “will continue to operate on the tripod of Consultation, Reward and Punishment” and called on staff to “internalise the ideals of the founding fathers whose drive and commitment were geared towards saving lives.”