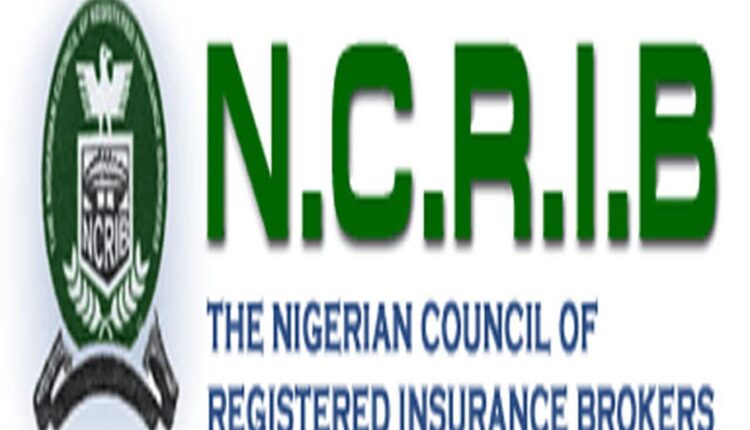 The Vice President of the Council, Mr. Tunde Oguntade made the disclosure while speaking to members of the National Association of Insurance and Pension Correspondents (NAIPCO) shortly after their 2020 Annual General Meeting (AGM) yesterday in Lagos

Mr Oguntade who represented the NCRIB President, Dr (Mrs) Bola Onigbogi at the occasion also called on Federal Government to engage the services of the registered insurance Brokers in order to mitigate the risk of contact failures.

According to him: “The 2020 Group Life is off the schedule because full premium has been paid on the account for the current year, there’s no lapse in cover at the moment.

“On government contracts what we are trying to do at NCRIB is to talk to ministers through our liaison committee and leadership that the contract failure thing you have all over the federation if you have insurance and you have Brokers arranging them for you, of course all those contracts failure will not be there because contracts failures are sometimes premeditated and they do not want to listen to us.

“We have been talking to them about all these roads, bridges and rails under construction on the importance of the government to engage the Brokers. If they don’t want the contracts to fail they know what to do. Imagine someone who go to roadside agent to ask for insurance policy. It’s the NCRIB that puncture that thing and say this is wrong. We will continue to do our best to engage government as long as government is willing to do the right thing, NCRIB will be there to support them.

On the issue of deepening insurance, he said there are several ways that can be done.

“You have online models which is referred to as technology, you have physical, and you have referrals. If somebody tries to get you online, you are bouncing, tries referrals, you you are bouncing, he will try the last option which is physical correct. There’s nothing that is wrong. The fact that I want to see someone physically is that I wish to convince the person that I have the skill, I have tried to get to you through technology, people have tried to make impact for me to meet you but to no avail, let me now put my face to the picture so that you will be able to see. When you see people going to the market, it doesn’t mean that they do not have technology,” he added

On application of technology in their operation, Mr Oguntade said what NCRIB has done is to ensure that all its members are ICT savvy.

“What we have done in the NCRIB is that you cannot be a member without being information and communication technology (ICT) savvy. NCRIB has moved from manual to digital. Very soon renewal this year will be by the portal. Our members are well trained. You cannot say somebody is a Broker without being technology savvy. NCRIB is in tune with what the government is doing and we are in tune with what is happening in the outside world. You should expect more from the NCRIB, “ he said.

Also speaking at the event, NCRIB’s Executive Secretary, Mr Fatal Adegbenro said on the area of government contacts, the Council is in very close contact with government agencies, stating that every year the Council writes to inform them on the need to engage the services of the registered insurance Brokers even as he noted that the Council’s collaborative relationship between with the National Insurance Commission (NAICOM) is very high now to make sure that fake Brokers are eliminated in the system

“Everybody knows that in every clime we have fake teachers, fake police, fake lawyers and what have you. You cannot whisk that away in any society, but the cooperative effort between NAICOM and NCRIB, a lot of thing is being done to minimize it.