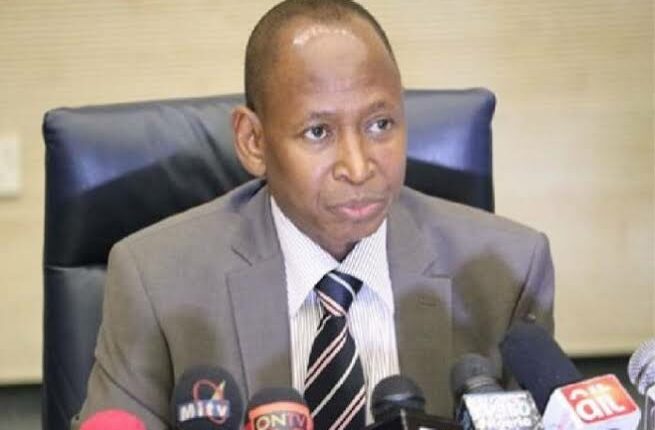 The Accountant-General of the Federation, Ahmed Idris says educating the girl-child remains necessary if the nation’s quest for development is to be achieved.

Idris was quoted as having made the remark when he received when the Management of Yusuf Maitama Sule University, Kano paid a courtesy visit to the Treasury House, Abuja.

In a statement by his Information officer, Esther Okoro, and made available to Daily Tracker on Sunday, Idris noted that no effort should be spared in educating the girl-child, because women remain strategic to nation building.

The AGF also took time to x-ray the functions of the Office of the Accountant General of the Federation which he said is the driver of key public finance management reform initiatives.

According to him, the office deals with matters of allocation to States, Local Government and other tiers of Government at Federal level, States and Local Government, external and domestic loans, releases to MDAs as well as matters of finance around bilateral concerns with countries and service foreign mission.

“Many at times I had instances to make corrections that this is an Office mainly for the Federal Government, it goes beyond limiting us really to activities to do with Federal Government. We equally train public finance officers, we have Federal Treasury Academy, Orozo with large expanse of land, and facilities for lectures, auditorium, ICT Centres, classroom with recreational facilities, hostel for both female and male”, he stated.

Ahmed further  said that there could be a positive synergy between OAGF and the University for development in academics just like the National Open University of Nigeria (NOUN) did to develop its business school, adding that his Office will play a role of igniting some sense of development by talking to Tertiary Education Trust Fund (TETFund), Petroleum Technology Development Fund (PTDF) for intervention to assist the University.

AGF stated that he was aware of Central Bank of Nigeria (CBN’s) intervention at Bayero University Kano (BUK) and promised to talk to them to visit Yusuf Maitama Sule University, Kano and impact in a way they deem appropriate for development. He said that women are pillars in every developed economy and promised to give endowment award to the best three female students in any discipline for the next 20 years.

Speaking earlier, the Vice-Chancellor of Yusuf Maitama Sule University, Kano, Prof. Aliyu Musa congratulated the AGF for his enormous work and the efficiency of his office to serve the country and also for his contributions towards the growth of the University.

Prof Aliyu Musa said that a lot of work has been carried out in terms of getting development effort from sister organization such as TETFund towards the growth of the University.

He stated that the AGF has shown dedication and concern towards Kano State and academic development of the institution through donation of books and series of conference journals as well as community services and prayed that he continues with the good work.

“The purpose of our visit here is to intimate the AGF about the state of the University in terms of the hostel accommodation that we are in dire need of , because75% of our students are females, and no female hostel, which is a concern to the parents and the community in general”, he said.

According to him, this hampers the University development because they want women to be trained since the Northern States are working hard to accelerate girl child education. Therefore, there is need to encourage female education to enable them contribute to the growth of the society.

He further solicited the support of AGF in his capacity as Kano State indigene, to be a rallying point for the development of the University.

All rights reserved. This post: 'Female education, crucial to National Development says AGF' and other digital content on this website, may not be reproduced, published, broadcast, rewritten or redistributed in whole or in part without prior express written permission from Anambra City News.