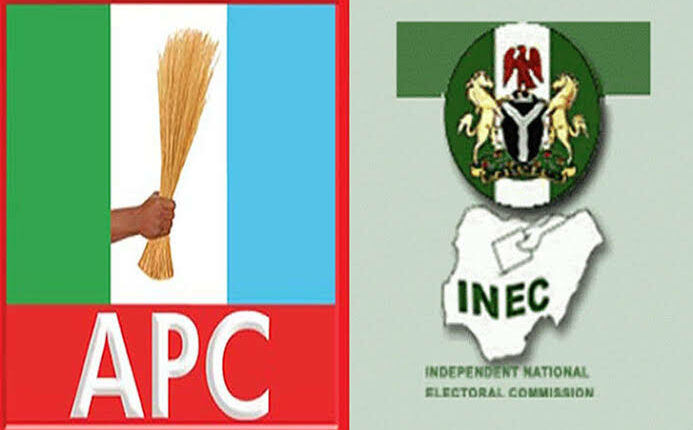 Ahead of the September 19 Governorship election in Edo State, the All Progressives Congress (APC) has accused INEC’s Resident Electoral Commissioner, Mike Igini, of colluding with Governor Godwin Obaseki, to rig the forthcoming election.

The party alleged that a secret midnight meeting took place at the governor’s private residence between the INEC senior officer and the PDP candidate on Thursday.

In a statement by Mr. John Mayaki, the Chairman of the APC Media Campaign Council, the party alleged that Igini met with the embattled Edo Governor in his private residence at 3am on Thursday alongside other political allies, including Mr. Anselm Ojezua.

He said Mr. Mike Igini and others left the Governor’s private residence with sacks of money after the meeting following an alleged deal to rig the election in favor of the PDP.

He called on INEC to investigate the meeting and commence an immediate sanitization of its internal staff to halt the alleged infiltration of the commission by Governor Godwin Obaseki through bribes and recruitment of past and present staff.

The statement read: “It is now glaring to us that the embattled and rejected Governor of Edo State, Mr. Godwin Obaseki, and his divided party of tax-collectors, the PDP, are planning a complete infiltration of INEC by luring both past and present staff with huge bribes and other inducements to facilitate and aid their plot to rig the September 19 Governorship election of the state.”

“Barely 24 hours after we blew the lid of the hiring of Mr. Oluwole Osaze-Uzzi, INEC’s former Director of Publicity and Voter Education, by Governor Godwin Obaseki to obtain inside information on the result collation process of the electoral body in order to perfect their rigging plans, and videos of Mr. Osaze-Uzzi’s profligate mansion being constructed in Benin city have hit the internet, we have been reliably told of another secret meeting between Governor Obaseki and Mr. Mike Igini.”

“Mr. Mike Igini who is INEC’s Resident Electoral Commissioner, Akwa Ibom, Mr. Anselm Ojezua, and another avowed ally of Mr. Godwin Obaseki drove into the Governor’s private residence around 3am on Thursday, August 27, for a secret meeting where they discussed ways and methods to rig the September 19 Governorship election, we have been reliably told.”

“After the meeting, Mr. Mike Igini and the other participants left with sacks of money which we are convinced was illegally sourced from the Edo State treasury to bribe and induce these persons into implementing the criminal plan to rig the election.”

“We wish to alert INEC, the people of Edo State, and all Nigerians to this evil plot by Governor Godwin Obaseki and Mr. Mike Igini to subvert the election and swap the votes of our people with fake ballots and pre-written results already being cooked up in the Edo Government House.”

“Before now, Mr. Mike Igini has been indicted in illegal conscription of Youth Corp members in Edo State on behalf of Mr. Godwin Obaseki as part of their efforts to rig the election.”

“We are demanding that INEC immediately investigates the secret midnight meeting between Mr. Mike Igini and Obaseki and commence a comprehensive sanitization of its internal staff involved in the Edo election to purge it of saboteurs who have sold their conscience to Mr. Obaseki in order to protect the integrity of the electoral body.”

All rights reserved. This post: 'Edo 2020; APC accuses INEC REC, Igini of compromise' and other digital content on this website, may not be reproduced, published, broadcast, rewritten or redistributed in whole or in part without prior express written permission from Anambra City News.