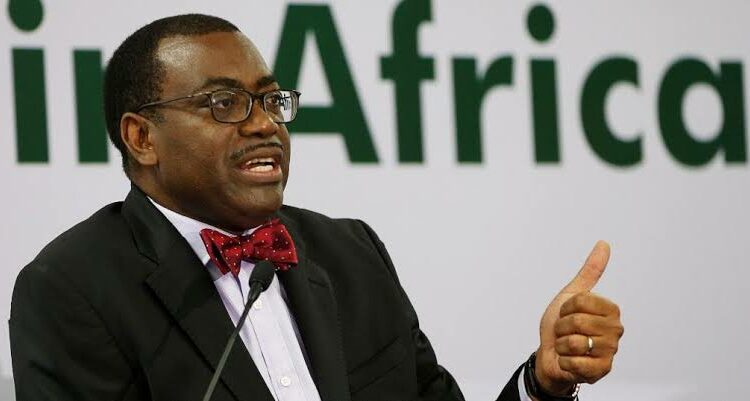 Basking in the euphoria of his re-election as the President of the African Development Bank, Dr. Akinwumi Adesina says his historic re-election via a hundred per cent votes was a call for selfless service to Africa and the bank.

In his acceptance speech to the Bank’s Board of Governors and other stakeholders, Adesina pledged to devote himself to service, vowing to justify the confidence reposed in him.

“Of course, right now, the sound that is the loudest in my ears is the announcement of my re-election as President of the African Development Bank for a second term.”

“I am deeply grateful for the collective trust, strong confidence and support of our shareholders for electing me for a second term as President. It is yet another call for selfless service to Africa and the African Development Bank, to which I will passionately devote myself.

“This was very important; it shows the transparency of our bank, it shows your demonstrated weight of support behind my vision.

“It shows a very clear and strong mandate from all shareholders to go and implement the vision, it shows that all voices were heard, it shows that we are true to the constitutive test of our bank.

“The future beckons us for a more developed Africa and a much stronger and resilient African Development Bank Group. We will build on the strong foundations of success in the past five years, while further strengthening the institution, for greater effectiveness and impacts.”

The election result, which gave him a hundred percent of votes of all regional and non-regional members of the Bank, was announced by the Chairperson of the Board of Governors of the Bank, Mrs. Niale Kaba, Minister of National Planning of Côte d’Ivoire.

The election took place on the final day of the 2020 Annual Meetings of the African Development Bank Group, which was held virtually for the first time in the Bank’s history.

A message posted on the Bank’s website quoted the the Chairperson of the Board of Governors of the Bank, Mrs. Niale Kaba,  who is also a Minister of National Planning of Côte d’Ivoire as saying, “I am delighted that the Board of Governors has re-elected Dr. Adesina for a second term in office as President. As shareholders, we strongly support the Bank and will give him all the necessary support to carry forward and implement his compelling vision for the Bank over the next five years.”

The Bank noted that Adesina’s first term focused on the bold new agenda for the Bank Group based on five development priorities known as the High 5s: Light up and Power Africa; Feed Africa; Industrialize Africa; Integrate Africa; and Improve the Quality of Life for the People of Africa.

“The Bank has maintained its AAA-ratings by all major global credit rating agencies for five years in a row. The Board of Governors of the Bank Group approved a 125% increase in the General Capital of the Bank, raising its capital from $93 billion to $208 billion, the largest in the history of the Bank.

“The African Development Fund received a $7.6 billion pledge from donors, a 32% increase, for support to low-income countries and fragile states. The Bank was ranked the 4th most transparent institution globally by Publish What You Fund, bolstering its strong governance credentials for transparency and accountability.

“Under Adesina’s leadership, the African Development Bank’s Board of Directors approved a $10 billion facility to support African countries to address the COVID-19 pandemic.

“The Bank also launched a $3bn COVID-19 social bond on the global capital markets, the highest US dollar denominated social bond ever in world history, which is listed on the London Stock Exchange, Luxembourg Stock Exchange and NASDAQ,” it added.

All rights reserved. This post: 'Adesina: My historic re-election, a call to selfless service to Africa, AfDB' and other digital content on this website, may not be reproduced, published, broadcast, rewritten or redistributed in whole or in part without prior express written permission from Anambra City News.