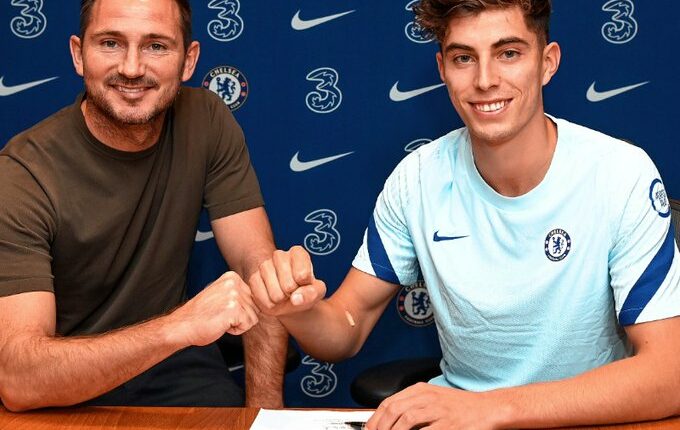 Chelsea confirmed the signing of German international Kai Havertz from Bayer Leverkusen on a five-year deal on Friday.

Havertz’s arrival at Stamford Bridge for a reported £71 million ($94 million), takes Chelsea’s spending spree in the transfer window to nearly £200 million as the Blues seek to cut the gap on Liverpool and Manchester City at the top of the Premier League.

The transfer of the young, highly-rated attacking midfielder from Bayer Leverkusen follows on from the purchase of Timo Werner from another Bundesliga club RB Leipzig, and is in addition to the recruitment of Hakim Ziyech, Ben Chilwell and Thiago Silva as Frank Lampard’s squad for the forthcoming season takes shape.

Chelsea has also signed young French defender Malang Sarr who is going out on loan with a view to gaining more experience before he is involved.

Havertz had this to say on becoming a Chelsea player. ‘I am very happy and proud to be here, For me, it is a dream come true to play in a big club like Chelsea and I can’t wait to meet all the players and the trainers. Yeah, I am very happy to be here!’

Chelsea director Marina Granovskaia added: ‘Kai is one of the best players of his age in world football, so we are very happy that his future lies at Chelsea. He has proven pedigree in one of the best leagues in Europe, he plays for the German national side and he is an exciting, dynamic talent. We are delighted to be able to add his versatility and quality to the squad before the season begins.’

Havertz has become one of German football’s highest-rated young players following his breakthrough at Bayer Leverkusen, setting a series of records for his achievements, including those for the youngest player to make 50 and 100 Bundesliga appearances, which were both previously held by Timo Werner.