By Anambra City Report On 5 days ago 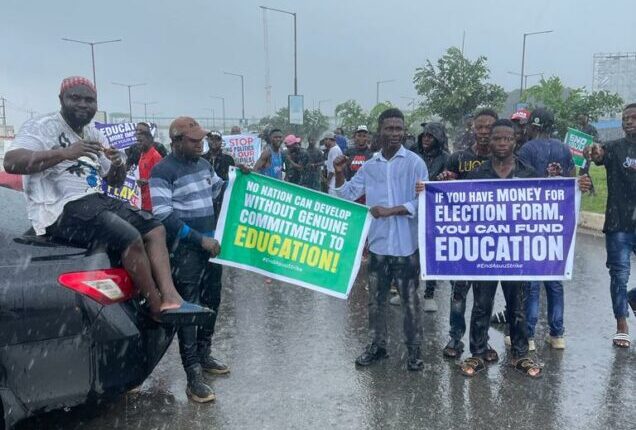 Students from the National Association of Nigerian Students (NANS) are currently demonstrating at Lagos’ Murtala Muhammed International Airport over the ongoing ASUU strike.

They were seen carrying placards with inscriptions like “#EndASUUstrike”, “If you can afford an election form, you can fund education” at the terminal access gate in Ikeja.

Earlier, Mr Ojo Olumide, the Chairman of, NANS National Task Force on ‘End ASUU Strike Now’, disclosed on Sunday that the students were already sick of appealing to both parties to terminate the strike.

He said, “The four-day shutdown of busy highways and expressways had been a success, hence the move to disrupt international travel as of September 19, 2022.”

It is in order for “the bourgeois and the government to feel the pains that they have subjected students to in the past seven months.

“We shall begin another round of protest next week by storming the airspaces on Monday, September 19th, 2022 to #OccupyTheAirports. We want to let the world know about the pain and anguish students are going through,” he added.

Many travellers en route to the Lagos International Airport were caught up in the demonstration, causing some of them to miss their scheduled flights.

Residents and motorists were also held up in traffic.

However, operatives of the Lagos Police Command and the Lagos State Traffic Management Agency (LASTMA) dispersed the group.

Efforts to end the seven-month strike action have met a dead end, as the Academic Staff Union of Universities (ASUU) remains unyielding till all demands are met.

Dismissing Wike will be dangerous for PDP – Governor Ortom