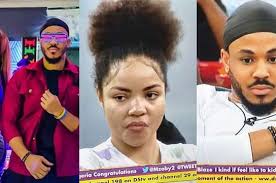 Ozo on Monday emerged as the Head of House for the second time in the Big Brother Naija Lockdown season for the sixth week.

Ozo who dusted fellow housemates to emerge victorious chose Nengi as his deputy.

He had also emerged as the HoH in the third week of the lockdown season.

With his victory, Ozo and his Deputy will enjoy exclusive access to the HoH luxury Lounge for the week.

They would also enjoy immunity from nomination for possible eviction for the week. The couple also chose Neo and Vee as their guest for the week.

Ozo described his victory as exciting as it would afford his admirers including friends and family an opportunity to rest from voting to keep him in the house for the week.

He also promised to keep the house in order in his second term as HoH.

He also pledged to root for Nengi to emerge as HoH by next week when he (Ozo) will be ineligible to vie for the position.