36 states, FCT to set up panels of inquiry on police brutality‎ 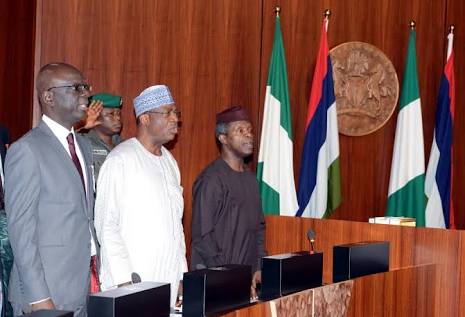 The 36 states and the Federal Capital Territory administration are to set up judicial panels of inquiry to investigate complaints of police killings and brutality.‎

The decision was taken at the National Economic Council meeting  on Thursday.

The NEC which is chaired by the Vice- President, has all state governors, Minister of the Federal Capital Territory, Governor of Central Bank of Nigeria and some ministers as members.

Senior Special Assistant to the Vice President on Media and Publicity, Laolu Akande, disclosed the outcome of the meeting in a statement titled ‘NEC to govs: Take charge of police tactical units’.‎

“Rising from its monthly meeting the National Economic Council has directed the immediate establishment of state-based judicial panels of inquiry across the country to receive and investigate complaints of police brutality or related extra judicial killings with a view to delivering justice for all victims of the dissolved SARS and other police units.

“The council also resolved that state governors and the FCT Minister should take charge of interface and contact with the protesters in their respective domains,” the statement said. ‎

The judicial panels which would be set up in all the states would be chaired by retired state high court judges.

Terms of reference for the panels include: to receive and investigate complaints of police brutality or related extra judicial killings; evaluate evidence presented/other surrounding circumstances, and draw conclusions as to the validity of the complaints; and recommend compensation and other remedial measures, where appropriate.

The panels are to conclude their assignment within a maximum period of six months unless it shows convincing reasons why the state governor should allow an extension.‎

All rights reserved. This post: '36 states, FCT to set up panels of inquiry on police brutality‎' and other digital content on this website, may not be reproduced, published, broadcast, rewritten or redistributed in whole or in part without prior express written permission from Anambra City News.