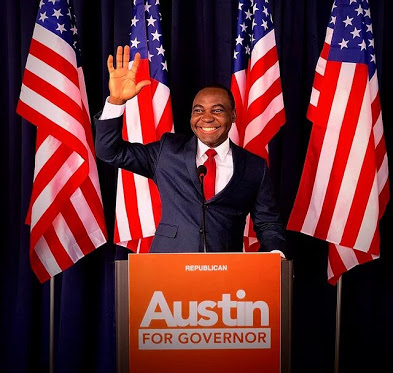 A 34-year-old Nigerian, Austin Chenge, has joined the race for the Governorship position in the state of Michigan in the United States of America.
The election is expected to hold in 2022.
A statement by the Head of Media and Public Relations unit, Nigerians in Diaspora Commission, Abdul-Rahman Balogun, identified Chenge as a native of Benue State.
Chenge is expected to challenge USA Representative, Lamar Smith, for the ticket under the Republican Party.
The statement further noted that Chenge announced his intention to run for governor of Michigan in March 2020, making him the first Republican to do so.
The statement said Chenge is popular locally for designing the popular tricycle, known as “Wazobia tricycle”, in 2016, in order to improve the lives of peasant farmers all over Africa.
“Chenge is a Law graduate from the University of Birmingham, England. Since the year 2018, he has been serving with the US military as a specialist. He is decorated with the Achievement Medal as a Distinguished Honour Graduate with a Culmulative Grade Point Average (CGPA) of 99.8% and for exceptional performance while on active duty,” it added.
“Austin has always stunned critics by achieving what others consider impossible. A graduate of the School of Law at the University of Birmingham, England, Austin raised over $200,000 in funding for his first startup,/Holla.com (now sold) in England and soon expanded to San Jose in California.He created Waving in a social networking environment in 2011, a concept later seen on Facebook’ Wave. In 2016 his tricycle design (termed Wazobia tricycle) aimed at improving the lives of peasant farmers, made history in the West African nation of Nigeria as the first designed, engineered and manufactured by a person of Nigerian descent. Since 2018, he has served as a Specialist in the US Army, where he has been decorated with an Army Achievement Medal as Distinguished Honor Graduate with a CGPA of 99.8% and for exceptional performance while on Active duty.As of March, 2020 Austin became the first Republican Candidate for Governor of Michigan, for the 2022 election,” a biography on Chenge’s website added.

All rights reserved. This post: '34-year-old Nigerian joins Michigan Governorship race' and other digital content on this website, may not be reproduced, published, broadcast, rewritten or redistributed in whole or in part without prior express written permission from Anambra City News.

Some people have made billions from #EndSARS protest – Sowore