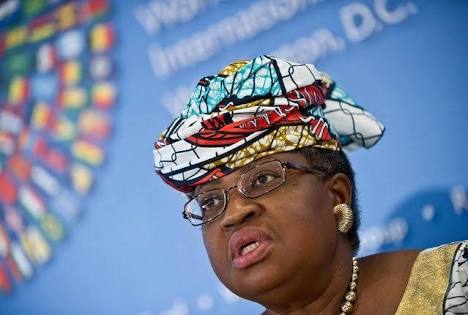 Nigeria’s former Minister of Foreign Affairs, Ngozi Okonjo-Iweala and seven other contenders for the headship of the World Trade Organization commenced their pitches with three days of auditions that started on Wednesday.

The contenders were expected to make 15-minute presentations to the 164 member states’ representatives at the WTO headquarters in Geneva, before facing a 75-minute grilling over their plans for the global trade body.

After a series of eliminations based on consensus, starting in September, the winner will take the WTO wheel in the midst of a global economic crisis triggered by the coronavirus pandemic.

South Korean Trade Minister Yoo Myung-hee and former Saudi economy minister Mohammed al-Tuwaijri are running from Asia, while Mexico’s former WTO deputy director-general Jesus Seade Kuri was the first to declare his candidacy.
Seade, Okonjo-Iweala and then Mamdouh are up first on Wednesday.

Ulianovschi, Yoo and Mohamed take their turn on Thursday, while Tuwajiri and Fox go on Friday.
“The WTO is in a serious crisis,” Seade told the UN correspondents’ association.

He said the body had “very limited results” to show for its 26 years, its dispute settlement system was “in a serious state of disrepair”, while measures taken by countries to control the COVID-19 pandemic “have generated gigantic dislocation of international trade”.

Since the WTO was created in 1995, three of its directors-general were from Europe, while one each came from Oceania, Asia and South America.
Africa therefore fancies its chances, even though there is no regional rotation principle at the global trade

COVID -19: Chief Judge of Federal High Court on self isolation