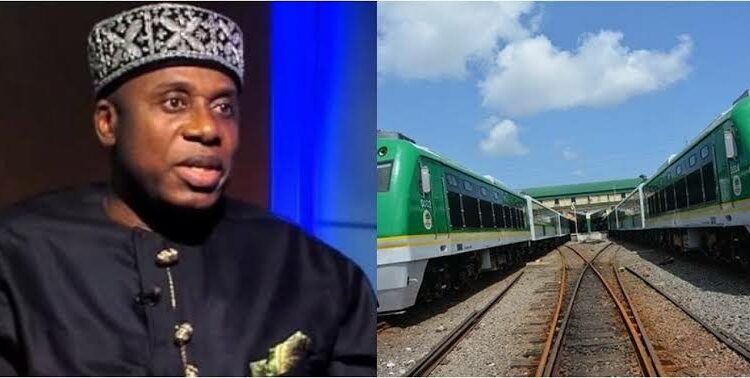 Three key members of the Federal Executive Council have been summoned by the House of Representatives to answer questions on the $500million loan to be sourced from the Export-Import Bank of China for railway lines in the country.

Activities revolving around railway lines have dominated the media in recent times especially the naming of strategic railway stations after notable Nigerians by President Muhammadu Buhari.

The lawmakers also extended the summons to the Director-General of the Debt Management Office (DMO), Ms. Patience Oniha.

The Chairman of the House Committee on Treaties, Hon. Nicholas Ossai who issued the summons on behalf of the committee said those summoned are expected to appear before the committee on August 17 with details of the contracts involved.

The four key members of the President Buhari’s administration would be expected to provide details on the agreement signed between the federal ministry of transport and the CCECC in respect of the Abuja-Kaduna, Lagos-Ibadan, Ibadan-Kaduna and Kaduna-Kano railways lines.

The committee chairman said they would require details on the agreement between the federal ministry of transport and ZTE (Nig) Ltd in respect of the provision of community actions and signaling equipment for the Itakpe-Ajaokuta-Warri line.

They would also provide details of the agreement between federal ministry of transport and the China Railway Construction Company International (CRCCI) in respect of the Itakoe-Abuja line/ New Port in Warri project.

Issuing the summons during its sitting on Tuesday, the committee also raised alarm over alleged waiver of Nigeria’s sovereignty in the government concessions, loan agreement on Nigeria National Information and communication technology infrastructure backbone phase II project between the government of Nigeria, represented by the federal ministry of finance (borrower) and the Export-Import Bank of China (lender) dated September 5, 2018.

The committee specifically cited Article 8(1) of the agreement, which states that ” the borrower hereby irrevocably waives any immunity on the grounds of sovereign or otherwise for itself or its property in connection with any arbitration proceeding pursuant to Article 8(5), thereof with the enforcement of any arbitral award pursuant thereto, except for the military assets and diplomatic assets”

Ameachi, while making his presentation expressed dismay over the incessant investigations by the lawmakers, noting that such a trend could jeopardize the process of obtaining the loans. He therefore appealed to the committee to shelve the summons till later in the year when the loans would have been obtained.

He however explained that the loan being sourced by his ministry is a total of $500 million to complete the Lagos -Ibadan railway line, which he put at a total of $849 million, with $349 million as counterpart funding,

He explained that because China, which is giving the loan is sensitive and monitoring happenings in Nigeria, the House committee might wish to give him till end of December when all the loan would have been received.

“My fear is that if this probe continues, at the end of the day, some sections of the country may suffer. In oversight, there is what is called national interest. But in asking questions on these loans now, it may jeopardize these loans. The Lagos- Ibadan is not completed; the Ibadan- Kano is not completed.

“Let the government of China not say there is a disagreement in government on this loan and so we will not give this loan. So, I appeal to the chairman to give us from now till December, when we are likely to secure the loans. Then, from January, February, you can resume this investigation”