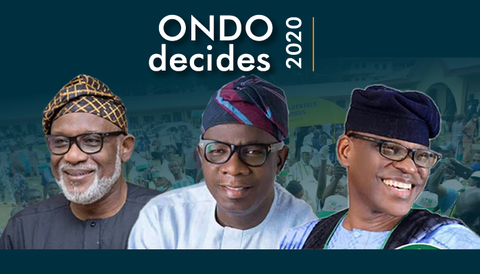 The three major gladiators in Saturday gubernatorial election in Ondo State have won their respective polling units sign-posting their acceptance by their own people.

Governor Rotimi Akeredolu, who is seeking reelection on the platform of the All Progressives Congress, won the election held in his Polling Unit 6, Ward 5, Isokun, Ijebu Owo.
He scored 413 votes to defeat Peoples Democratic Party’s Eyitayo Jegede, who polled 12 votes; and the candidate of the Zenith Labour Party, Agboola Ajayi, who scored zero.

Also, Jegede won his Igbogin/Isikan Ward 2, unit 9, polling 220 votes against 60 recorded by Akeredolu while Ajayi got seven votes.
At home, Ajayi, the deputy governor of the state, also won in his polling unit in Kiribo in the Ese Odo Local Government Area of the state.
According to the result pasted at the unit by the officials of the Independent National Electoral Commission, titled ‘Publication of Reault of Poll’, Agboola won the Apoi Ward II, Unit 004, Idumado Quarters, Kiribo with a wide margin having garnered 395 votes.

His closest contestant, Akeredolu, scored 13 votes while Jegede secured five votes.
Meanwhile, voting has ended across the state while sorting of votes and counting is still ongoing at different polling units in the state as of the time of filing this report.

All rights reserved. This post: 'Ondo Election: Akeredolu, Jegede, Ajayi win polling units' and other digital content on this website, may not be reproduced, published, broadcast, rewritten or redistributed in whole or in part without prior express written permission from Anambra City News.